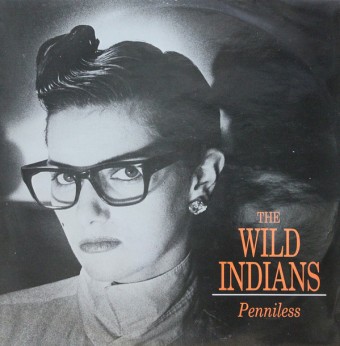 From the notes that come with the Big Gold Dreams boxset:-

The duo of vocalist Fiona Carlin and guitarist Kevin Low made two singles as The Wild Indians, on which Pop Wallpaper’s rhythm section of bassist Myles Raymond and drummer Les Cook played. The second, a 12” made up of three tracks of designer pop, was produced by John McVay of Visitors and engineered by Chic Medley of Perth-based electro-pop band Fiction Factory, with whom Carlin would sing with on their second album track, Victor Victorious. As a designer, Low’s work went on to grace many a record sleeve, including ones for The Delmontes and The Blue Nile. Low worked as a theatre photographer for many years, and is now a painter of note.

Beyond this, it is quite hard to track down any further info – they are one of the few Scottish bands from the era who don’t get listed in The Great Scots Musicography by Martin C Strong, published in 2002, and to which I havce turned on many an occasion to fact-check/confirm or indeed get the basics!

The lead track from the second single is included on BGD and has proven to be one of my favourites of those I didn’t previously know:-

Turns out that Kevin Low has also posted up, on you tube, a rarely-seen promo for the single:-

I turned to Discogs and found info on the band’s first single. There were different personnel involved judging by the credits list:-

As such, it would appear the rhythm section of Pop Wallpaper stepped in as replacements for Kay and Bo.

Sorry about the lack of info, but it’s the best I can do.

I do have some info on Pop Wallpaper, and indeed have a 12″ single of theirs in the collection, but that’s a story for a later installment in the long-running Saturday Songs from Scotland series