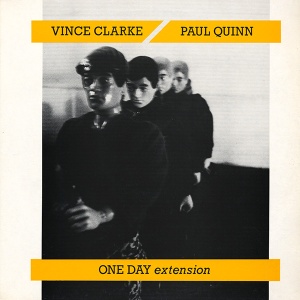 It’s down to the fact that this is more of a Vince Clarke record than a Paul Quinn record which kept it out of the ongoing Saturday series.

Vince had enjoyed chart success with Depeche Mode, Yazoo and The Assembly between 1981 and 1983. Indeed, there hardly seemed to be a singles or album chart in the UK over that period where one of his songs didn’t feature.

In 1985, much to many people’s surprise, it was revealed that he had hooked up with Paul Quinn. Some of the fruits of their labour were released on a 7″ and 12″ single on Mute Records. This is the 12″ version:-

Here’s the rarely seen promo for One Day which was a #99 hit in the UK charts.

And now for a little footnote….

The b-side (and superior song in my view) was composed solely by Vince Clarke.

The a-side is attributed to Clarke/Morgan/McVey….and here’s who the other two were:-

Morgan McVey were a mid-1980s pop duo with a background in fashion photography, video direction and modeling, composed of Jamie Morgan and Cameron McVey. Jamie Morgan has been highly influential as part of Buffalo, a styling team whose streetwise look was typical in the style mags of the time.

The group released a single, “Looking Good Diving”, through Sony Records in 1986, produced by Stock Aitken Waterman and mixed by Phil Harding. The B side, called “Looking Good Diving with the Wild Bunch” featuring Neneh Cherry, was a tribute to the buffalo stance. The B side was re-recorded 2 years later by Neneh Cherry as “Buffalo Stance” and it went to #3 in the UK Charts and the Top 10 around the world in 1988.

You learn something new all the time round here.