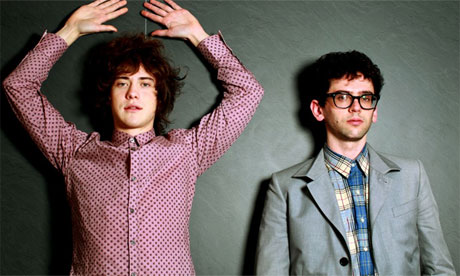 I was tempted to post this last week as it arrived the same day as the Beach House ICA. But I held back as I thought it was just about perfect to banish any Monday Morning blues you may be suffering from.

The second 11th song on the way up to Gatwick Airport was nowhere near as dramatic in the choice of band but it was way more dramatic in how it came about. It occurred somewhere along the A303 about five miles from Stonehenge. It has also just started to rain. Track nine was something by much missed angst ridden indie band Pure Morning and this quickly segued into ‘La Femme D’Argent’ by Air and as the jazzy licks of that filled the air, a shriek came from the back of the car.

I’ll add for effect that each time the word ‘It’ came forth from Mrs B’s voice it was louder and angrier.

Turns out that Mrs B doesn’t like wasps very much. A word rarely uttered from a lady’s mouth follows, which I have left blank for you all to fill in “Wasps, I hate the little __________, stop the car or I swear on all that is holy that I’ll open the door.”

I’m cruising at like 75 miles an hour, the window is open and the bugger flew in. I do the only thing that I can, I pretend not to have heard and speed up slightly.

I’m joking, I slow down and pull over, of course I do.

Mrs B is out of the car quicker than a fat bloke at a free buffet and thankfully for her (and it) the wasp flies out of the open door and off into the Wiltshire countryside.

That folks wasn’t the dramatic bit.

“Sorry” she mumbles. “I was stung by a wasp about ten years ago – do you remember Tim?” she says “It was when we went nude swimming in the River Teign, it got me right on the arse, never liked them since then.”

Tim splutters and pretends to be looking for a packet of Starbursts in the glove box.

I look at him and then in my rear view at Lorna and wryly ask “Nude Swimming?” trying to raise my eyebrows like Roger Moore used to do.

I restart the engine as The Badgers compose themselves, Tim having sunk about three foot down in the seat, and Lorna sitting there with a look of ‘What?’ going on.

There is silence in the car and then the 11th song kicks in. The band is MGMT. I hit the steering wheel because I had been praying to everything that is holy that ‘Naked In the Rain’ by Blue Pearl came on instead. On reflection I only own one Blue Pearl song but buying nine more would have been worth it.

“Oooh Tricky” Tim suddenly goes, I nod, and add “A bit like sitting down when you’ve been stung on the arse by a wasp”.

MGMT describe themselves as a psychedelic rock band from America (Brooklyn, New York I think) who make pop music that isn’t comfortable. So it is perhaps fitting that they are the subject after two periods of uncomfortableness within my car. MGMT have released three albums (Oracular Spectacular, Congratulations, and MGMT). A fourth believed to be titled ‘Little Dark Age’ is supposedly set for release later this year. I think MGMT are an outstanding band, a band that never fail to please, and their first album is particularly wonderful. They seem to be a band that have more tricks up their sleeve that a dinner party magician, although it’s a dinner party magician heavily influenced by Spacemen 3.

Oh and I’ve deliberately left ‘Kids’ and ‘Electric Feel’ off of this ICA because, well it would have been a boring first album heavy leg slap of an album otherwise.

There is of course only one place to start when we are considering an ICA on MGMT…….

“Lets make Some music, make some money, find some models for wives…” this track couldn’t be any easier on the ear if it tried. Shamelessly poking fun at rock star dreams and ‘living fast and dying young’. Brilliant drenched in synths and catchy riffs, MGMT announced their arrival to the world with not just a terrific single but with one of the best tracks in the last ten years.

Straight after ‘Time To Pretend’ came this a lovely little psychedelic pop tune smattered with acoustic guitars and Vanwyngardens passable Mick Jagger impression, and you get cymbals, that crash all over the place. It sounds like what the Flaming Lips should have sounded like if they were any good.

I’m going to stick with the debut album for now because this is where the ‘uncomfortable’ thing comes into its own. You get drums not heard since The Greatest Paganistic Ritual Album….Ever, you get mad questions being asked in the lyrics, and basically this is the sound of moon gazing set to music. Its still bloody ace though.

For their second album the band teamed up with their hero Sonic Boom to give us an album of oddball psychedelia that contains precisely zero singles. ‘Flash Delirium’ was the most accessible and enjoyable moment of it – apart from the last thirty seconds or so, which is just a bonkers wig out.

The third album found the band experimenting again. It’s kind of like they are scared of writing actual pop songs, because underneath the weird effects and the breakbeats is a glam melody and a decent pop song but they try their best to disguise with all the stuff them dumped on top of it which just turns it into a cosmic, proggy smash of well everything I suppose.

I’ll keep this short this song is basically what Beck would sound like if all of his back catalogue were blended into one song and then remixed by UNKLE. That by the way is a very good thing indeed.

More from the last album, and following on from the last track, this track sounds like a Blur song remixed by the Aphex Twin, and again its very very good indeed. There is this little scattering beat running through it and a flute or something that when they gel are just divine.

‘Congratulations’ the album is as good an example of commercial fucking suicide as you will ever hear, and the noise you hear halfway through it is the sound of the mainstream running away. But then you hear this track, the title track and its lovely, which stands out through the space rock, the flute solos, the bonkersness and the teapot carrying gnomes, and you realise that they can still write some killer tunes. A song so lovely that it applauds itself at the end. Yup.

Talking of killer tunes – for five minutes this is as close as the band have come to perfection since ‘time to pretend’ before they ruin it with twenty odd seconds of weirdness. Again. Before that this is a sombre dewy eyed melody that recalls childhood spooky dreams and I personally think its marvellous.

Dan Treacy led 80s post punk band The Television Personalities before he vanished in the nineties, he was thought to be dead, but he eventually resurfaced. This song kind of tells that story, its all snappy beats and electronica but the lyrics about a man ‘frozen in time’ are really poignant.

So there we have it. MGMT, more fun than a sting on the arse. Or to coin the new phrase being banded around on these pages, “MGMT had it, hid it, couldn’t remember where they left it, found it, smoked it”.

PS : I  asked Tim at a service station about an hour later if he had done much nude swimming. He said ‘No’. Followed by a swift “Its too cold” . He said that after Lorna got stung on the arse, she made him run – tackle out – his words – to the car to get the first aid kit. The car was half a mile away.