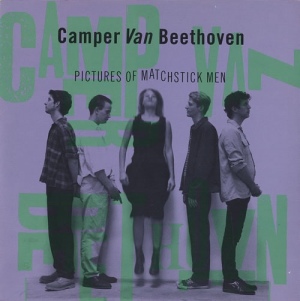 I mentioned last Saturday how the b-side of the single by Zones reminded me so much of the late 70s era three-bar blues style of Status Quo who remained one of the most popular and biggest selling bands in the UK even as punk, new wave and electronica gained footings in the music world. I was of an age that only knew that particular version of the Quo and wasn’t aware till many years later, when I saw footage from a 1968 Top of the Pops show that was part of a music series the BBC were broadcasting that I learned the band had started out making what is has been described as psychedelic pop.

Pictures of Matchstick Men was their first Top 10 hit single and was a song heavily influenced by the popular sounds of its time such as later-era Beatles and Beach Boys and contemporary bands such as Pink Floyd. I’m not a huge lover of the psychedelic pop genre – this might come down to a lack of exposure to it from my mum and dad (see last Monday’s posting!!) although there one or two songs I can listen to now and again such as Itchykoo Park by Small Faces and Happy Together by The Turtles.

The Quo 45 was the subject of a cover version in 1989 by Camper Van Beethoven who, just four years earlier, had been responsible for one of the finest, most enduring and most fun singles of the mid 80s:-

I’d never heard the cover version before I picked up a second-hand copy the other week and I was hoping for a quirky take on it given that this was the period when the band had a violinist in their line-up.

I think it’s fair to say it was a major disappointment. This bore no resemblance to the sorts of music the band had been making just four years previously. It is depressingly bland and lacking any sort of rhythm or soul but when I looked up details on wiki I learned that it was their biggest selling single which I found rather depressing reading.

The b-side isn’t any better as they put to music the tale of the man who shot the man who assassinated the President:-

It’s always disappointing when a band, in an effort to record and release music with a broader appeal than their earlier material, lose the very bit of magic that made them stand out in the first place.

File under…played once and put away in the back of the cupboard.

Released here in the UK on Rough Trade Records in 1986, I was very surprised to learn that it was only ever an album track in their native USofA:-

This is an utterly joyous two and a bit minutes, and it’s opening few bars are guaranteed to cheer me up and make me smile no matter how foul a mood I’m in. One of the greatest and catchiest sing-a-long songs of all time, and yet its success caught the composer, David Lowery, by surprise:-

“I never thought that Take the Skinheads Bowling would become a Hit. If someone had traveled from the future and told me we would have a hit on our first album I would not have picked this song as being the hit. Not in a million years. I would have more likely picked Where the Hell is Bill.

Why? We regarded Take The Skinheads Bowling as just a weird non-sensical song. The lyrics were purposely structured so that it would be devoid of meaning. Each subsequent line would undermine any sort of meaning established by the last line. It was the early 80′s and all our peers were writing songs that were full of meaning. It was our way of rebelling. BTW this is the most important fact about this song. We wanted the words to lack any coherent meaning. There is no story or deeper insight that I can give you about this song.”

Here’s the other bits of music  made available on the 12″ single:-

In case you are wondering who the subject matter of the last song is, (he is described on the back on the sleeve as ‘a real bastard’)…..he was one of the founders of the armed contra army which was formed to oppose  the Sandinista government of Nicaragua and which had very controversial links with American military intelligence throuighout the 80s.