It’s not easy coming up with fresh ideas for this little corner of the internet that have the ability to run’n’run. The ICAs have worked, Jonny’s charged particles are proving to be popular and I suppose the weekend features will always generate copy. This one might work…but will again likely depend on the views and opinions of the readership.

I want to look at singers or bands who, at some point in time, had ‘it’ (however you choose to define ‘it’) and then all of a sudden, and usually without warning, lost ‘it’ and never recovered ‘it’. I’m not meaning those who gave us a stellar debut album and a bum follow-up as the rock and pop worlds are littered with such acts. This is about folk who were massively popular and deservedly so only for their music to go a bit ‘meh’; sometimes their popularity remained intact and their profile remained high while others would see their sales plummet and fade quietly into obscurity. Oasis are an example of the former while most of their Britpop peers can be filed under the latter.

I’m doing parts one and two in a single sitting. Two of the biggest stars whose music once made me smile but then made me squirm. 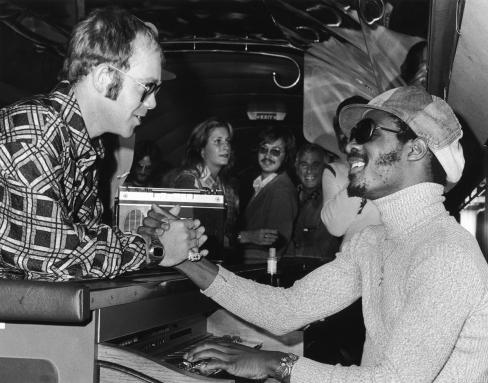 It was this incredibly imaginative advert that helped remind me of how much I enjoyed listening to Elton John songs when I was a young kid.

Rocket Man was a huge hit back in 1972, hanging around the singles charts for months when I was turning nine years of age. Like probably just about every other kid of that age and of that era, the idea of space travel was particularly exciting with tales of the exploits of astronauts all over newspapers and television, while Star Trek was a show that was watched and enjoyed my parents (whom I’ve just realised would have only been in their mid-30s at this time) as well as my five and six-year old younger brothers. Elton’s hit 45 just seemed to be part of the magic of that time.

I guess that made me something of an Elton John fan, albeit I wasn’t yet at the stage of going out and buying his, or indeed, anyone’s records. Besides, I didn’t need to as some of my older cousins, whose house I’d go and visit every two weeks or so, seemed to have all his albums and they would let me hear his stuff, whether on vinyl (with record sleeves that always seemed so vivid and colourful) or on 8-track cartridge, which one cousin told me would soon make bulky record collections a thing of the past.

Here’s a reminder of some of the 45s that I would be exposed to over the next few years:-

In 1976, after many years of trying and near misses, Elton John finally hit the #1 spot; it took a duet with Kiki Dee to hit the pinnacle but Don’t Go Breaking My Heart just left me ice-cold. The thirteen year-old me didn’t have the capacity to offer any critical analysis of the song other than to say it was fucking shite (even as a pre-pubescent teen, I already had a capacity for swearing but never in front of my parents!). My admiration for Reg had come and gone. And it’s never come back.

Some of you will recall that myself and Jacques the Kipper pulled together a Billy Joel ICA for a bit of fun on 1 April 2016. We had a bit of a chat on the way to the football one day as to how we could follow it up this year and I really wanted to do similar to Elton John’s 1980s output. You know, the classic songs that area such a part of everyday listening on the smooooooooooooth radio stations.

Nikita; I Guess That’s Why They Call It The Blues; Sad Songs; Kiss The Bride; I’m Still Standing.

Jacques talked me out of it. I suppose I should thank him as I would have needed to listen to the songs again if I was to have a stab at such an ICA, even for piss taking purposes.

Stevie Wonder has been making music for some 55 years so inevitably there’s going to be a variation in quality. Some of the very earliest material hasn’t stood the test of time all that well but there are some golden nuggets to be unearthed such as this from 1965:-

But it’s the period from 1968-1977 that holds up to anything anyone else has ever produced over a similar length of time. Fifteen of his singles went Top 20 in the Hot 100 in the USA; he was just as successful in the UK with thirteen Top 20 hits. Some of them were straightforward love songs, others were brilliantly conceived socio-political commentaries on the issues facing black and poor people in his home country. All of them had tunes that were just killer. Here’s four such examples:-

The first sign of decline came with the double album The Secret Life Of Plants in 1979, albeit this was more a soundtrack to a documentary than a ‘proper’ commercial release. The following year saw the release of Hotter Than July, an LP that turned out to be his most successful album in the UK, selling more than 300,000 copies and spawning four Top 10 singles.

One or two of the songs on the album are up there in quality with his 70s output but others are just awful, not least Happy Birthday, his the well-intended and heartfelt tribute to Martin Luther King that suffered immediately from being hijacked for every single celebration party of that period. But, given that the song did so much to raise the profile of the campaign to have Dr King’s birthdate declared as a national holiday in the USA, I really shouldn’t really be so curmudgeonly. The sad thing, however, is that it’s an LP that has, for the most part, dated really badly and the ballads/love songs in particular are not a patch on his earlier efforts in that genre.

But what followed afterwards in the early-mid 80s was cringeworthy. Ebony and Ivory – the toe-curling and insufferable duet with Paul McCartney; I Just Called To Say I Love You which seemed to be #1 for months on end in 1984, no matter which country you lived in; Part Time Lover, a song that sits alongside those of Phil Collins as examples of what was so wrong about the charts of the era.

In 2017, Stevie Wonder remains a hugely important and influential recording artist and social figure. Just don’t ask me to listen to his recent music.

Now. Any volunteers to come up with Part 3?