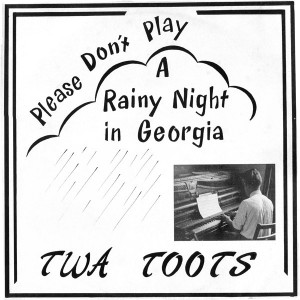 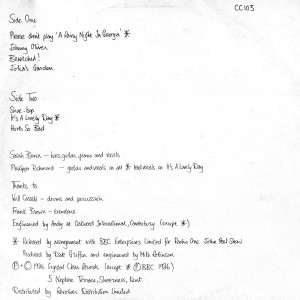 The onset of November means cold, dark and depressing days. I’ve a cunning plan to deal with it, certainly for the first two weeks, and it’s going to be through the power of twee-pop. Songs so light and airy that are totally out of place with the mood that normally envelopes me at this time of year.

I’m totally indebted to Sterling Cale from the now, very sadly, defunct Maggiot Caviar, for the bio on the first band in this short series. He penned these words back in July 2012:-

Here’s a band so obscure they’ve even managed to elude the all seeing eye that is Wikipedia.

Often linked with Trixies Big Red Motorbike, not only because they were considered to be mining similiar musical territory, but through a number of unusual coincidences: both groups were duos inhabiting small islands off the UK’s southern coast (in Twa Toots case the Isle of Sheppey); both groups rarely played live (if at all); both groups emerged at around the same time to record sessions for John Peel after sending him demo tapes; both groups faded back into the obscurity from whence they came soon after.

But unlike Trixies, Twa Toots were known to emerge from their bedrooms on more than one occasion to record their songs in proper studios on the mainland.

The group – Sarah Brown (vocals, guitar, bass, piano), Phillipa Richmond (guitar, vocals) – recorded their debut (and only) Peel session in 1983, augmented by Will Cassell (drums) and Sarah’s dad Frank on trombone. But it wasn’t until the latter part of 1986 that this seven track mini lp quietly slipped out on the Crystal Clear label (Cat. No. CC103) in a pressing of just 250 copies.

Long before the Stone Roses adopted a similiar ploy, it would be followed up five years later by a single, Don’t Send Me Flowers, on the Rootin’ Tootin label, which in turn would be followed up in 1996 by a 15 track compilation album of the same name (featuring mostly previously unreleased material) on the Accident label (who also simultaneously released a Trixie’s comp – more coincidences).

Four of the songs on this lp were not included on the Accident album. The title track and It’s A Lovely Day (both recorded for the 1983 Peel session) were eschewed in favour of alternate demo versions. Shoe Bop and Bewitched have, to my knowledge, never been commercially available since this release.

The opening track is on a cassette somewhere in a big box underneath the spare bed.  It’s one of dozens of compilation C90s put together by Jacques the Kipper back in the early 90s when we first hooked up via work and I keep telling myself I should pull the lot out and feature them in a series.  Maybe next year….