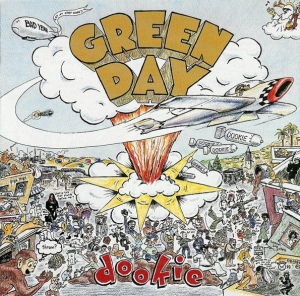 I can’t abide Green Day.  Mrs Villain on the other hand adores them.  We really do violently disagree on their merits. I think of them as a second-class pub punk band fronted by someone who eerily reminds me in looks and voice of Billy Joel.

But I do accept that every band, no matter how lousy, will have a decent song in them somewhere.  In Green Day’s case that is American Idiot which is deemed acceptable for sentiments in the lyric.  But not any of the songs from Dookie, although what follows is a typically wonderfully surreal yet true episode in the life of S-WC.

Sending this early because I am away from a computer for the next three days. This was the CD at the top of the pile. So I just wrote about that.

At the start of 1994 I started my first ever stint as a DJ. It was a small affair, on a Thursday in a pub in Maidstone. It was my job to play records and CDs before a live band came on around 10pm and that was that. I got paid £15 for my troubles and I got two free drinks from behind the bar and my own weight in peanuts. It was alright, on the odd occasion I got to hang out with some up and coming indie upstart (Hi Ange from Eat if you are reading….) and I made some decent contacts.

For some reason my street cred went up whilst I was DJing – and I say DJing, I was literally pressing play on the CD Player or sticking a record on, I was hardly Brandon Block. However for about six months I was one of the people to know in Maidstone, well sort of.

One evening I was pressing play on the CD Player when the band for the evening turned up – they were a student band from nearby Canterbury and had that kind of attitude that made you hope that they never ever became famous – as it happens – they didn’t. They were called Black Vinyl Lust. To be honest that’s not a bad name for a band. They thought they sounded like the Jesus and Mary Chain but sounded more like Achtung Baby era U2. Actually they were pretty terrible, their guitarist, wore fish net tights, not a bad look if you are female and carrying a guitar (which he wasn’t), but a terrible look if you are an art student called Craig and hail from Weston Super Mare (which he was).

They bought a crowd with them though so it was pretty packed, people were dancing to my poorly selected tunes and I didn’t care. It was usual for people throughout the night to hand me CDs to play and I would play them, the cuter the girl the more likely I was to play them – I was 18 and single, come on, if you can’t be shallow then when can you?

About twenty minutes after the band arrived I was chatting to the drummer, a curly-haired chap called Brian, who said that his girlfriend had a CD on her and wondered if I could play track seven just before they came on. It was Basket Case by Green Day. A song which had kind of broken in the clubs and was one of the more popular tracks of the evening, I sort of wanted to play it earlier but I agreed.

‘Great’ he said ‘I’ll send her over later, she’s just parking her car’.

I carried on playing some records, I think I played something by Bjork and definitely something by Nirvana and the Smashing Pumpkins, I was just queuing up (as we DJs say), Stutter by Elastica when I saw her.

It was Our Price Girl. I’d not seen her for a year – since she’d dumped me in fact. This happened at twenty past eleven on an October evening outside the Kentish Town Tube Station after I dissed Cud. She was carrying a purple balloon at the time, she told me to fuck off and leave her alone as I stood on the down escalator. As I turned to reason with her, a man came bounding down the escalator to try and catch the train coming into the station. He burst her balloon as he barged past. She chased him to the bottom, caught him, and punched him full to the face, drawing blood and gasps from a frankly astonished crowd of Londoners. I walked on to the opposite Platform and jumped on the first train that arrived, I ended up at Waterloo Station, and spent the night at my uncles (I definitely did not sob into a House of Fraser duvet set in their spare room no matter what he tells you) who luckily for me lived near the train station and didn’t mind that much if I turned up reeking of cheap cider at close to midnight on a Saturday night.

She followed this with an embarrassed sounding ‘Hi’. I managed a Hi back.

I then realised that she was holding something in her hand, it was ‘Dookie’ by Green Day. So she was the drummer’s girlfriend. Brilliant. I hate drummers.

‘Brian said that you’d play Basket Case before they come on’.

Yeah, I did, hang on I said. I turned away and set ‘Stutter’ going.

I realised then I had no idea what to play next I didn’t even have the record ready. I grabbed something, anything, from my box. I span round again. She’d gone. She wandered back over to the band and was being massively affectionate towards the Brian the drummer. The CD was left on the side next to the decks. I threw it in the box containing my CDs and that is where it stayed (I had the single version of ‘Basket Case’ already). I looked in my hand and I swear I didn’t plan this but there in my hand was Purple Love Balloon by Cud. What the hell I thought, and stuck it on.

The band were about three songs in, I sat at the bar chatting (well shouting) to a chap I knew when Our Price Girl came over. She stood next to me and ordered a Bacardi and Coke – we chatted and it was more relaxed. It turns out she met Brian at a gig, they were supporting Senser at some venue somewhere and got chatting to him there (weirdly the next gig they had was supporting Cud in London). She seemed happy and that I suppose was the main thing. Suddenly she said ‘You were supposed to come after me…At the tube station…You vanished…I got arrested’.

I smiled, to be honest I was slightly pleased about that. Kind of. Sorry.

Then she said, ‘That is genuinely the first time I have heard ‘Purple Love Balloon’ since that evening’ and then she laughed and I joined in. I have something for you I said, stay there, I went and got the CD of Green Day and gave it to her. She smiled, grabbed a pen off the bar and wrote her phone number on the sleeve ‘Call me’ she said and with that she was gone.

You’ve probably all heard ‘Dookie’ by now. Love it or hate it – Its one of those landmark albums that forced record companies to start paying attention to punk rock again. It produced five hit singles, won them a Grammy for Best Alternative Album and to date has sold more than 8 million copies in the US alone. So I won’t go on about it. I will say that this is the same CD that Our Price Girl gave me that night and here is a photo of the sleeve complete with her old phone number on it (its not her phone number now – so don’t phone it!). 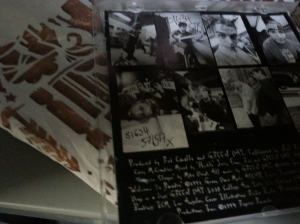 Here are the other four singles from it. Each one of them is great in its own merit. I personally think they never topped ‘Basket Case’ but certainly Welcome to Paradise comes close.