A guest contribution from S-WC. 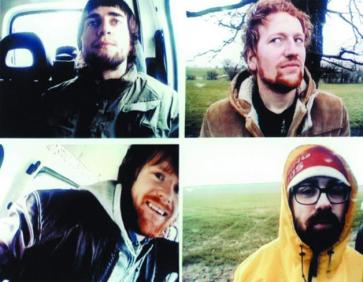 Stop Fighting with your Thoughts – A Beta Band Imaginary Compilation

One of the best scenes in the film High Fidelity is the scene where the lead character who works in a record shop says ‘I will now sell five copies of The Three EPs by the Beta Band”, it was around that moment when the Beta Band were finally a ‘cult band’.

That one line, probably the most iconic plug for a band in a movie ever, summed up the power of Steve Mason’s band from Scotland. A band that as I have said before on these very pages dragged rock music kicking and screaming out of the Britpop malaise and influenced and wooed everyone from Noel Gallagher to Thom Yorke. Back to the film, John Cusack in the movie then played ‘Dry The Rain’ and people will buy it and even though you don’t actually see anyone part with their cash (its film, right.) you know that at least five copies will have been sold before closing.

The Beta Band were brilliant, they merged hip hop electronica, folk and pop music together and it came out as one sound, one incredible massive sound. But at the same time they never took themselves that seriously, they mucked around, wore stupid hats but we let them because their music was so good. Yet they never really had the global success that they deserved, each record they released struggled to find its audience. They released three album plus the ‘Three EP’s’, the first one ‘The Beta Band’ is often overlooked because the man itself described it as ‘fucking awful’. It isn’t by the way, it’s actually pretty good.

In 2004, the third and final album appeared this was ‘Heroes to Zeroes’ it was a bit of dramatic shift – its not a bad record but they tried to make it sound more commercial and whilst it has its moments like the Siouxsie Sioux sampling ‘Liquid Bird’ and the terrific single ‘Out Side’, it feels a bit flat in places. A band pushing to make it on the radio and failing so they simply gave up. The Beta band were always a band who thought to much and spent too long in the shadow of Radiohead so here after a few weeks of planning is the Beta Band Compilation. Hope you enjoy it.

I’ll put in as simple as this, ‘She’s the One is the sweetest, most smile inducing and best song the Beta Band ever made. After all this is a simple song, that chant (a common theme, you will find) “She’s the One for Me” which gains more power with each repetition, that takes your focus so much that the climax almost burst out of nowhere. A brilliant way to spend eight and a half minutes.

‘Round the Bend’ is the Beta Bands funniest and saddest moment. It’s also one of the few times in which the lyrical genius of Steve Mason out shines the music. It’s a tale of shit night out and Mason is very specific in the lyrics, his simple thoughts of going out drinking alongside fantasy’s about pyramids blend brilliantly.

This song shows that despite all the ideas and innovation, the Beta Band also made really simple sweet jams sound incredible. The song is basically an acoustic guitar, a harmonium and obviously a bit of beat boxing. It doesn’t have a chorus or even a proper verse and at just short of six minutes that is pretty magical.

The best song off ‘Hot Shots II is also the best example of where different sounds gel together perfectly. I should have put this as track 2 on side one because it’s the perfect antidote to ‘She’s the One’. I love the way this song hypnotically weaves music around two devastating statements “You and I will never be fine” and “I never even tried to smile for you”. Crikey that’s harsh.

‘Eclipse’ closes ‘Hot Shots II’ and it feels like a big hug after an album of cold and bitter music. It is almost the complete opposite of every other track on the album, its long, it’s a bit silly and its really chilled out. Whereas the rest of ‘Hot Shots II’ is obsessed with death, this is an acoustic guitar torch songs that ends with what sounds suspiciously a prog rock jam. Don’t let that put you off Side Two please.

‘Squares’ opens with an a capella moment and immediately you know that this is something different. The drums crack in like fireworks and barely form a beat until it blooms suddenly and its iconic ‘Daydream’ nods jumps in. Strangely both The Beta Band and I Monster both used the ‘Daydream’ song in the same year and the melodies are so similar that they get confused. But whilst the Beta Band version has depths in between the hooks that makes the song sound sinister and like a bad acid trip and as the song goes on you hear the shout of ‘Daydream’ turning more and more into a nightmare. But it is a wonderful piece of music.

Perhaps an example of why so many people were pissed off with the first Beta Band album. On first listen this song is a mess – a repetitive percussion heavy jam and I think it always sounded like a B side to a dance 12” with added mumbling, Mason is ad-libbing. So why is it on the album?? Because 5 years later LCD Soundsystem did exactly the same thing and made me listen to this all over again and realise the genius of it.

‘Needles In My Eyes’ is a track that best describes a break up like no others, there is one line here “Last night I dropped my heart and I never want to see it again”. It leaves you numb and you feel the pain and it is almost a relief when you hear the next verse state that “Needles in my eyes won’t cripple me tonight”. Phew.

For most people this is the best Beta Band song, but it isn’t you have that right at the beginning of this compilation. It was one hell of an impressive debut though. You will of course remember the chant “I will be your light” and the opening line “This is the definition of my life/Lying in bed in the sunlight/choking on the vitamin tablet” which is a lyric so Radiohead like that I surprised they didn’t actually write it. From that moment on I knew that this was a band I would love and in Steve Mason a singer I would worry about. Oh man, its such a good record.

“Pure For’ is the last song on the final Beta Band record so ideally it should close the imaginary compilation, right? This is just too sparse to do that, it’s mainly just a drumbeat , a few synth chirps and a guitar that has been recorded backwards – there is no grand conclusion apart from the chant of “I’m so glad you found me”. It is such a happy ending, you forget the limitations the band faced and you forget that its their last song and just let it engulf you.

7 thoughts on “AN IMAGINARY COMPILATION ALBUM : #60 : THE BETA BAND”