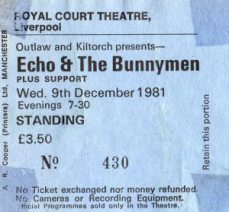 A very late change of plans at Villain Towers.

Echorich picked out ten great tracks that would make a tremendous Pete Wylie compilation and given that postpunkmonk has said he wished that he had picked up on more of the material back in the day, well I think it’s worth posting something up.  For those of you who don’t perhaps read the comments, here’s what echorich had to say:-

Pete Wylie is my favorite Rock Star of ALL TIME…Probably because he’s the only one I’ve gotten drunk with until 7am in a New York Nightclub 4 nights on the trot, and definitely because he NEVER attained Rock Start status but was always prepared for it.

JC, you’ve picked the three songs which earned him the rank of a great artist. But I will add three that I just can’t live without, and one is among my 10 favorite songs of all time.

The first, and one which first blew my socks off and sucked me into WAH!’s aural vortex was Seven Minutes To Midnight. There might not be any more urgent Post Punk song ever written.

The second, and the one which if count as an all time favorite is Hope (I Wish You’d Believe Me). To this day, this song sends chills up my spine and makes me quite emotional every time I play it.

The third is If I Love You. Again, Wylie’s straining, pleading singing just grabs the listener and won’t let go.

All of the tracks selected by echorich can be found on this long-deleted compilation CD which, if you see any second-hand copies kicking around, I would recommend you splash out on it.

Echorich also made some great observations on the solo career of Ian McCulloch:-

Candleland is the stand out, but there are some excellent moments on Mysterio – Pomegranate, Magical World, Dug For Love – which beats many of his contemporaries at the dance/rock emerging at the time and his gorgeous reading of Leonard Cohen’s Lover, Lover, Lover. In fact I’d say his version of the last song is as beautiful and seminal as Jeff Buckley’s career turn on Hallelujah. My favorite McCulloch song – it’s a b-side to Candleland’s Faith + Healing single – Rocket Ship. It’s an exuberant track with a heartfelt love song built-in.

I’m with him on Lover, Lover, Lover as being a tremendous cover version. Feels right that this week of nostalgically looking back at the class of Liverpool early 80s style should come to an end with these culled straight from the vinyl:-

while these are from CDs:-

The latter two are more great takes on Leonard Cohen originals – and incidentally, it was Mac’s love for the Canadian bard that turned me onto his songs many years after I had initially ignored them on the grounds of him being hippy-dippy and ultra depressing.