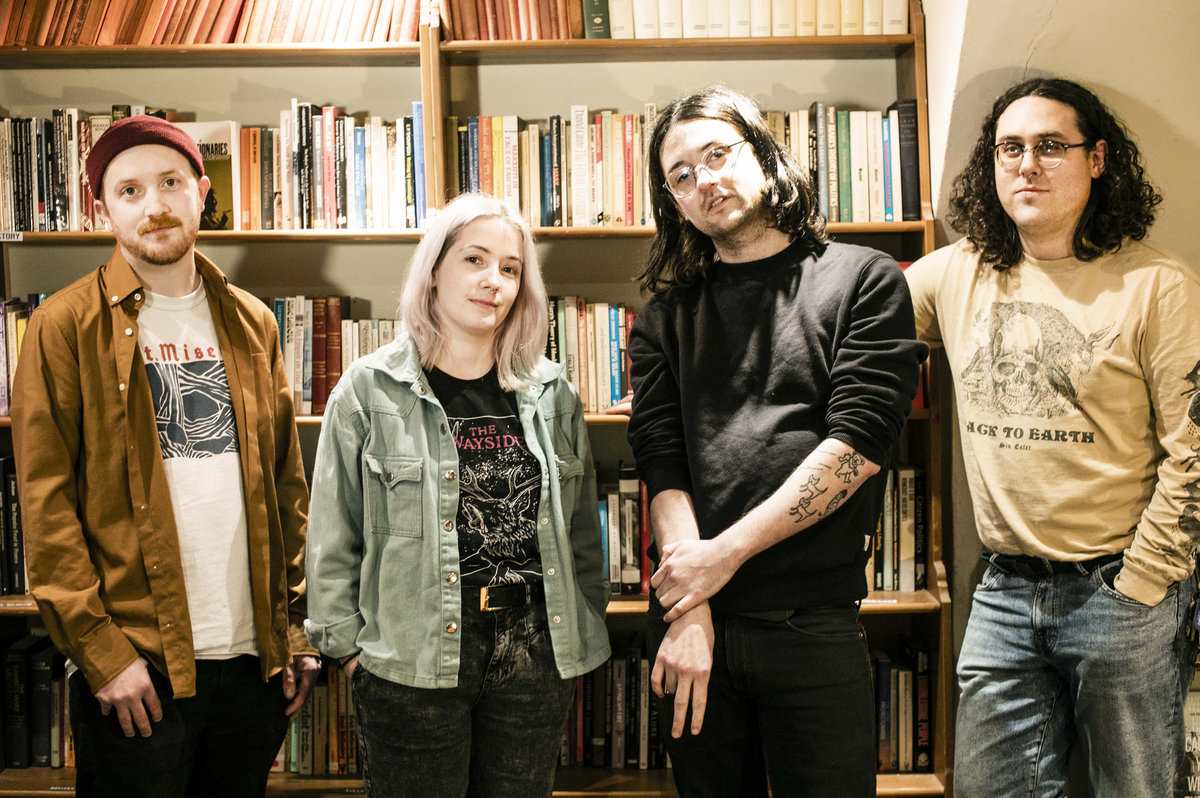 All being well, I’ll have been home for 24 hours*, but I really wanted to have this post close this short series as it focusses on one of Aldo‘s most-liked bands, and going by the fact they featured on no less than four of the Indietracks compilations, a real favourite among those who used to make the yearly trek to Derbyshire.

Martha, whose members are J.C. Cairns (guitar/vocals), Daniel Ellis (guitar/vocals), Naomi Griffin (bass/vocals), and Nathan Stephens-Griffin (drums/vocals), some from Pity Me, a village in County Durham in the North East of England. They have, in interviews, described themselves as queer, straight edge, vegan and anarchist. They have no designated front person and all contribute vocals.

After singles on their own Discount Horse label and Odd Box Records, their debut album Courting Strong, was released on Fortuna Pop! and Salinas Records in 2014. A series of spilt singles with a series of bands on different labels preceded the release, in 2016, of the second album, Blisters In The Pit Of My Heart on Fortuna Pop! and Dirtmap Records.

There would be one further single on Fortuna Pop! in 2017 before the label closed down, and Martha chose to sign with Big Scary Monsters, an indie label based in Oxford.  A series of digital singles were released in 2018 and 2019 in advance of their album, Love Keeps Kicking.

Still very much going strong, new album Please Don’t Take Me Back hit the shops at the end of October, this time on Specialist Subject Records, which is based in Bristol.  A UK tour to promote the album took place while I’ve been away, sunning myself.

The four songs on the Indietracks Compilations came from a variety of sources.

Sycamore was on a limited edition 7″ single issued by Odd Box Records, with copies now fetching upwards of £40 while 1997, Passing In The Hallway can be found on the debut album.

The demo of Westerberg Comprehensive on Indietracks 2017 was previously unreleased, but its finished form had been the closing track on the band’s second album that has come out in 2016.  Heart Is Healing can also be found on Love Keeps Kicking.

As it’s the final part of the series, I’m going to offer up a few more songs than has been the case over the previous eleven posts. They’ve been picked out at random, and I’m just hoping they manage to capture the fact there are four different vocalists………

Tomorrow will see the return of our dear friend, Dirk.

*I was talking nonsense…..I touched down at London Heathrow around the same time as today’s post was published.   I got my days all mixed up.  But don’t worry, Dirk will still be here tomorrow….it’s just that I’ll need to cut’n’paste his email while I’m half asleep.