a guest posting BY jimdoes 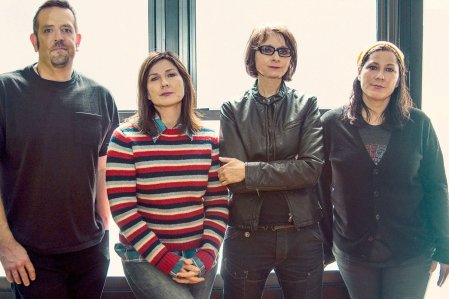 The Breeders have got a new album coming out next week (JC adds……well, they did have back in February when jimdoes sent this over!!) and to commemorate it I thought I’d do a quick ICA (if there is such a thing)

First up I’m a big fan of Kim Deal and did think about a Kim Deal ICA as she’s guested on quite a few records as well as made some formidable music with The Breeders – in all their various guises. I’ve tried to include something from each of their albums (they’ve been around for 20 years!) – otherwise there might be more songs from Last Splash. And I know The Breeders are more than just Kim Deal but she’s the singer and it’s her band, so I’m going to talk about the music and her. She’s the coolest Kim in music (sorry Kim Gordon, it was a close one) and The Dandy Warhols even wrote a song about her – which I’ve always thought of as a bit weird because they could never be as cool as Kim Deal and the song isn’t anywhere as good as anything by The Breeders.

There’s something about Kim Deal that makes me smile – maybe it’s because I imagine her smiling whenever she’s performing. Anyway, this is a track that I always put on compilation tapes that I gave to people in the Spring. “Summer Is Ready When You Are” – what a great line.

I’ve included The Amps as part of The Breeders because they pretty much were – when The Breeders went on hiatus, Kim Deal formed The Amps – as she’d done when Pixies had some down time. And they still play a few Amps songs live. Kim Deal could always write a good pop song and this is one of my favourites.

BANG ON (From ‘Mountain Battles’)

Here’s one you can do a sort of shuffling dance to (honestly) – it’s got a great beat. And Kim Deal is still smiling. And I love the way it ends – “missing gah”.

Kim gets all sensitive and introspective – but does it with such grace. Possibly the closest she gets to not smiling.

I’ve been obsessing about this song recently. It’s so good. One of the things I’ve always loved about The Breeders is you not one song sounds like it could have been a Pixies song – they just seem so apart from that bit of Kim Deal’s legacy. This one is maybe closest as it does have that LOUDquietLOUD thing going on though. Pod is one of my favourite albums but it’s always been one that I listen to in it’s entireity – it always seemed a shame to delve in to one track, but if you don’t know it this is a good starting point.

Released on an ep after Pod, a belter of a track. It wouldn’t have been out of place on Last Splash.

Considering that Pacer is such a rough and raw sounding album, it contains some of Kim Deal’s poppier moments – to my ears anyway.

And if this one doesn’t make you smile too, then I give up.

5 thoughts on “AN IMAGINARY COMPILATION ALBUM : #173 : THE BREEDERS”