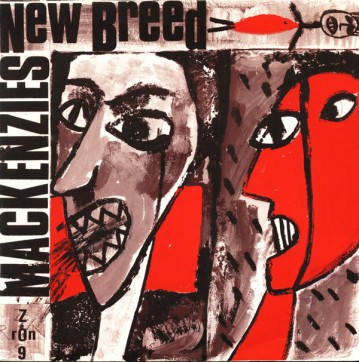 Today’s featured band have nothing to do with Billy or with Goodbye Mister…….but they were one of the 22 acts to feature on C86, the cassette compilation released by the NME, aimed at highlighting new bands on the UK indie scene.

Mackenzies were a short-lived band from Glasgow, and aside from the one track that was contributed to C86, there were just two releases for the Manchester-based Ron Johnson Records and a legendary Peel Session which was repeated on numerous occasions, thanks to it being loved by the Radio 1 DJ.

There’s next to no information on the band on the sleeves of their two singles, with everything being credited collectively and no names provided for who sang or played what instrument. I’m indebted to Martin Strong’s epic tome, The Great Scottish Musicography, which was published in 2002, for the info that there were originally seven members – Gary Weir (vocals), Iain Beveridge (guitar), David Allen (guitar), Pete Gilmour (bass), Paul Turnbull (drums), Peter Ellen (saxophone) and Scott Brown (percussion). In due course, there would be personnel changes, while some folk left not to be replaced, meaning that they were a four-piece by the time they got round to releasing their second and final single, including bassist Graham Lironi and drummer Paul Turnbull who, in the company of Katy McCullers of The Fizzbombs (as featured here previously in this series) went on to form The Secret Goldfish (who will be subject a later entry in this series).

As it turns out, I’ve three songs by The Mackenzies on the hard drive, all courtesy of them being included on compilations many years later. I may as well offer up all of them so that you can hear for yourselves that there ain’t nobody else from Scotland who sounded quite like them, albeit I will offer up some comparisons to Fire Engines:-