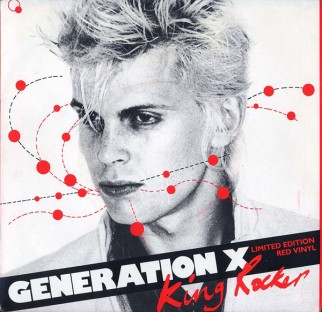 I wrote yesterday about my lack of love or respect for The Dickies and their take on the theme from the Banana Splits. They weren’t the only new wave/punk lot riding high in the charts who I despised (and at 15 years old, if you didn’t like a band or musician, they had to be despised….merely not liking wasn’t good enough).

Billy Idol and his band Generation X really got on my tits (hey, I know that’s not a PC description, but I’m thinking back to the sort of things I would say when talking to mates in my teenage years) for the simple reason that I thought he came aross as a complete wanker when he appeared on Top of The Pops and in print through the interviews he gave to the music press. They had already enjoyed a slightly more than minor hit a couple of years previously when this monstrosity just about went Top 10 in January 1979:-

Tedious, tiresome and cliched. And the song isn’t much better. The fact that Billy Idol would, just a couple of years later, relocate to New York and use his cartoon punk persona to find mainstream success, was no real surprise. His hit singles of the 80s are unlistenable.

What I didn’t know until looking into the release of King Rocker is that a fair bit of its success was down to it being released in five different formats, with the standard black vinyl being accompanied by red, pink, orange and yellow vinyl, all with different sleeves. It also had a cover version on the b-side:-

I promise not to be as grumpy next time I’m on…..it’s SWC time again tomorrow