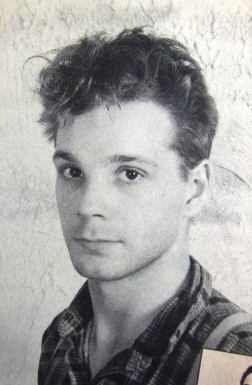 I received a really nice e-mail the other day from Scott who asked if it would be possible to re-post something from the old blog.

14th June 1989 when the life of Peter Louis Vincent de Freitas ended as the result of a motorcycle accident.

He was 27 years of age. And he was the first dead pop star I ever shed a tear for.

Born in 1961 in Trinidad, Pete de Freitas was a bit of a posh boy, educated at a famous Roman Catholic public school near Bath, England, and while he was far from dim, he was never keen on pursing an academic career. So by the age of 19, he was living in London, sharing digs with another lad from his old school, and both of them dreaming of forming a band.

Pete’s flatmate had a big brother who was involved in the music industry, part of an ever-growing new scene on Liverpool. That big brother and his close mate started staying overnight at Pete’s place whenever any of the bands they were involved with played in London. Pete would sometimes go along to the gigs, which is what he did one August night in 1979.

Pete’s flatmate’s brother was David Balfe, and his mate was Bill Drummond. The band they took Pete to see at the YMCA on Tottenham Court Road was Echo & The Bunnymen – a three-piece act backed by a drum machine. The drum machine was in fact ‘Echo’, the humans were ‘The Bunnymen’ – Ian McCulloch (vocals), Les Pattinson (bass) and Will Sargeant (guitar)

The band were getting a lot of attention, but it was widely felt that they would sound a lot better with a real drummer. Within 12 months of seeing them for the first time, Pete had that gig, just in time for the recording of the band’s second single, but their first for a major label.

From 1980 – 1986, Echo & The Bunnymen were one of the most entertaining bands on the entire planet. All four band members contributed to the songwriting, which showed in the magnificently tight unit that was the guitarist, bassist and drummer, while up front they had a hugely charismatic singer who was not slow in offering his opinions on any subject under the sun. They attracted a huge following, many of whom dressed in identical clothes and wore their hair in the same way as their idols. They enjoyed Top 30 success with seven of their singles, but it was their LPs which found them at their best, all four of them going Top 10.

Live, they were truly electrifying, with shows that stretched out for well over two hours featuring not just the hits, but great and unusual versions of album tracks as well as a handful of covers from many of their own influences.

Many people associated with the band, not least their larger than life manager and the frontman had predicted massive things for the 1984 LP Ocean Rain. And while it sold in impressive numbers, it didn’t conquer the world….

The band began to drift apart in some ways. First of all, McCulloch recorded a solo single. The others started producing and appearing on records by other bands. And in 1986, Pete de Freitas left the band.

Along with two members of the Bunnymen road crew, he took himself off to the USA to form The Sex Gods. The idea was to take the money he had made from his time as a Bunnyman, head off to places like New York, New Orleans and Jamaica, filming themselves as they went along living a truly hedonistic life. It was a bender to end all benders.

There were drunken rows, drug busts, near fatal car crashes amidst the chaos. Later on Pete de Freitas would admit he was going insane. He was eventually brought back to the UK by Bill Drummond.

He was temporarily replaced as the drummer, but the rest of the band soon realised how much they needed him, and he was allowed to re-join.

Echo & The Bunnymen released an album in 1987 called The Game – this time with very little hyperbole, and although it went to #4 in the UK charts, critical reaction was lukewarm. This time it was singer Ian McCulloch who decided that enough was enough, and he quit in 1988, intent on the solo career.

The other three decided to keep going, on the basis that having failed to really crack America with Mac at the helm, they could maybe succeed with someone different, unlikely as it might seem. The new recruit was Noel Burke, ex-frontman of St Vitus Dance….and someone who sort of looked and sounded like Mac….

The new line up were in rehearsals in Liverpool in June 1989, and Pete de Freitas was on his way there when he crashed his motorcycle on a back road near Rugely in Staffordshire. As I mentioned earlier, he was just 27 years old.

Years later, Les Pattinson in an interview with a music magazine said that he still thought of Pete every day. At his funeral, the three remaining original Bunnymen cried their eyes out….albeit McCulloch could not bring himself to speak to Pattinson and Sergeant for what he considered a betrayal in replacing him as singer.

I remember reading about Pete’s death in a newspaper the next day. My eyes welled up and my throat tightened. The man who I thought was the coolest man on planet pop was no more.

Quite a few years earlier, not far from my school, I had seen a motorcycle accident when the unfortunate rider was hit by a bus whose driver couldn’t have seen him. It was an incident that I hadn’t thought about much since, but it was the vision that flashed before my eyes as I read the paper, and it was something that gave me some sleepless nights over the next few weeks. Even as I type this, I can see that accident from over 30 years ago….all triggered off by the premature and sad death of a pop star.

You’ll see from the photo above that Pete was a good-looking man. He was someone who just about everyone I ever went out with during my years at University would admit to fancying. When you heard about the way he lived his life, you just wanted to be him.

He was only two years older than me. And while I have had a great and memorable almost 46 years on this planet, there’s still a part of me that wishes that I had lived his life for just one day…as long as that day wasn’t June 14th 1989.

R.I.P. Pete de Freitas. I still think of you every time one of your songs comes on my i-pod….

There were a lot of really nice comments left behind after the piece appeared, many of them thanking me for such a heartfelt tribute.

A few months later I received the most wonderful e-mail from Pete’s daughter. Lucie-Marie de Freitas was a very young girl when her father died, of an age before she could develop any memories of him.

Her e-mail explained that the treasure trove of songs, articles and videos have helped her learn so much about her father and the incredible impact he had in his short time on earth. She thought it was remarkable and moving that so many people still remembered him after all those years and she thanked me for the tribute I had made.

Talk about leaving me speechless.