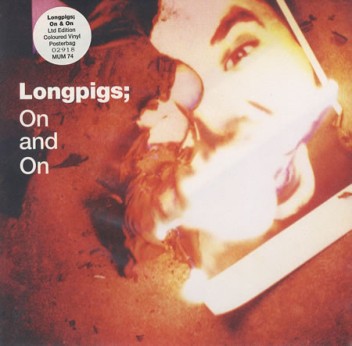 Although this was released in 1996 I’m going to talk about 1997. Well in a bit anyway. ‘On and On’ is if you ask me one of the finest moments of the Britpop era. It is one of the more tender tracks associated with that era. A track that sees chiselled cheekboned singer Cripsin Hunt howling like a Britpop version of an 18th century romantic poet about ‘wishing someone would leave him’. It quite rightly provided the band with their biggest hit (well joint with the re-release of ‘She Said’).

It came backed with another track taken from that which was

Now let’s skip on to 1997 by this time I was in my final year as a student and I was in a relationship with the lady who would later become Mrs SWC. We were happy (the same kind of happy that I mentioned last time) but things were heading to a crunch point. In about six months’ time, we would be graduating and we needed to make a decision, what do we do next? I was sort of trying to be a music journalist at the time, she was doing her thing and looking at the future but she had made it quite clear that she wanted to move back to her native Devon. In fact she already had a position lined up. I had nothing permanent lined up and if I wanted to be a music journalist that would have meant living in London, Shoreditch probably, which would invariably lead me to becoming an even bigger twat that I am already am.

One November evening we went to the cinema, we had a lovely meal before, the only thing I can remember about that was the ice cream at the end. A huge multi-flavoured affair lined with sweets and this sauce that tasted like jelly laces.

We then ambled across the way to the cinema, only to find the film we wanted to see wasn’t showing. I genuinely can’t even remember what film it was that we tried to see, but we instead decided to see the film ‘Face’. A British gangster film about a team of criminals lead by Robert Carlyle who do a big job which doesn’t go strictly to plan and there are dire consequences.

Its alright, the film. I mean you need to ignore the fact that Damon Albarn is in it, playing a nearly mute member of the gang but otherwise its ok. The reason why I’m going down this road is because ‘On and On’ features in it and for some reason it really got to me.

I sat there as the aforementioned Crispin Hunt wailed away and I glanced across at my beloved (who was probably gazing at Mr Carlyle) and I had this odd feeling inside me, and it slowly dawned upon me that she was more important than anything else that mattered. Anything else that has ever mattered come to think of it and without getting too gushy about it, this was the person I wanted to spend the rest of my life with and it didn’t matter where I did that. Its odd place to have an epiphany, in a cinema, listening to Britpop’s most tender moment, but that’s what happened. In the space of about four minutes, I decided to abandon my dreams for, well, the woman of my dreams, sorry that’s a naff way of putting of it but it’s late and I’ve had a glass of rum and ginger.

I was pretty silent for the walk home, and as we got back to her flat. I told her that I wanted to move to Devon (actually I said a lot more, but I won’t go into that) with her and that I was going to start looking for work down there. The rest is kind of history.