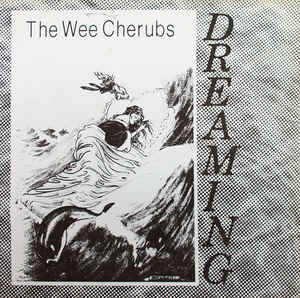 Here’s another one-off single from Scotland, as made available via the Big Gold Dreams boxset

Here’s the blurb from the booklet.

The shimmering guitars that opened this one-off single by Glasgow mixed gender quartet The Wee Cherubs were de rigeur in a post-Postcard world. Formed by singers Gail Cherry and Martin Cotter with drummer Graham Adam and bassist Christine Gibson, their sublime pop song-writing sensibility makes the A-side sound like it could have been recorded by an old-school lounge club crooner. A cover of the Velvet Underground’s I’m Waiting for the Man on the flip slowed the song down in a way that gave it a very different emphasis. Cotter claimed later that Dreaming sold so poorly that five years after it was released he dumped several boxes of unsold records in a skip. By this time, he and Adam had formed The Bachelor Pad, releasing several singles and an album, Tales of Hofmann.

I’m very indebted to Roque, from the Cloudberry Records blog, who earlier this year published this very informative interview with Martin Cotter.

The sleeve for the single does indicate there were four members in The Wee Cherubs but the photos and artwork feature one less than that, and given that Martin’s interview with Roque states they started rehearsing as a three-piece, it would likely be the case that Gail Cherry came on board specifically for the single on backing vocal duties.

It’s interesting in that I can remember reading about this band back in the day – they were part of the Glasgow scene in 1983/84 which was when I was besotted by local music – but I can’t recall ever seeing them play live, although that might be, again from Martin’s recollections in the interview, that they gigged a bit, but not a lot.

I certainly never bought a copy of the single, which came out on a very small local label called Bogaten, and given that copies of it are much sought after (there’s one for sale on Discogs with an asking price of £400), I’m kicking myself. Not as much, mind you, as Martin who confirms that he threw around 240 copies into a skip when he was moving house in the early 90s.

The b-side was quite different from the single in that it’s a cover of I’m Waiting For The Man, albeit The Wee Cherubs called it something different:-

mp3 : The Wee Cherbus – Waiting For My Man

Rather cheekily, the composing credits on the single state (L. Reed, arranged by the wee cherbus), and while it does offer a nod to The Velvet Underground there’s also something quite 80s indie about it.  I’ve a feeling it will divide opinion……….