Notwithstanding that the ‘A’ side of this single featured very recently in Sid Law’s wonderful mini-series, as I have a copy of the 12″ single it merits a slot within the Saturday Single.

39 Lyon Street was a one-off single project created by Associates. The group used an alternative name to exercise a clause in their contract with WEA that stated they could record for any label they desired, so long as the A-side was not credited to Associates.

This is how Lyon Street looked back in the 1980’s. A typical Dundee street that you would pass going into the city centre. In the early 80’s, however, something was brewing at number 39. A wee social gathering of creative musicians were busy producing acts who would go on to record some classy alternative pop music.

This is where Billy Mackenzie & Alan Rankine of The Associates were living, along with others. In amongst the others were Christine Beveridge & Steve Reid who went on to record as Orbidoig, releasing a couple of singles. A cross-pollination of The Associates & Orbidoig created a 3rd act called…39 Lyon Street. They also released a single, called “Kites”, which was a cover of the Simon Dupree hit from the psychedelic 60’s.

And here we are:-

And that dear readers, brings to an end this alphabetical and numerical run through some of the 45s that I have in the cupboard of vinyl or shelves of CD from Scottish acts.

Next week, I’m going to start all over again but this time looking at albums as well as singles or indeed featuring songs that I only have via compilations. 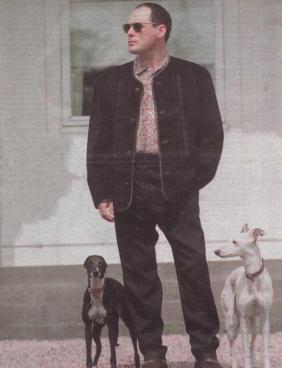 I don’t know what Billy Mackenzie might make of the music scene in Scotland today. Maybe Billy would have got his performance thing back and could have sung publicly again. I remember seeing Roland Gift about fifteen years back at the Speigeltent in Edinburgh one Festival and thinking “Billy should be here doing this…”.

I think the abiding thing I got from Billy and his music in the early 80’s was his playfulness and fun. Every TV appearance was hilarious (ever seen him do Amazing Grace with Paul Haig at Hogmanay?). He was dead cool, wrote some marvellous songs, had a voice to rival anyone and made it all seem like falling off a log. His death was due to Chronic Depression (the prescription drug mechanism is unimportant). When you look at how he was treated during his last ten years by the Music Business you can see how a soul like Billy could be damaged. Yet he really soared in his later work in the more free, more independent atmosphere of the mid 90’s. The shackles were off and he seemed to have such confidence in his abilities and a real command of his voice and… and then he was gone. At the top of his game.  And that is what I hope some of the upcoming postings over the next few weeks will demonstrate.

Billy recorded four albums with Alan Rankine (well two albums and one compilation and one remix album) all of which are great but then there were only another four albums afterwards (including Billy’s solo one and the then unreleased ‘Glamour Chase’) before he died.  What is often forgotten is just how many collaborations there were, partly because when  Billy had label problems (and he always did) he just looked around and did something else. Again, some of the upcoming postings will hopefully demonstrate that such collaborations, many of which were completed shortly before his death, have a quality of performance that are simply breathtaking.

One of the periods when Billy found himself in the frustrating position of having a record company that didn’t want to put out his records was in the late 80’s . Thankfully his pals like Yello and Uno (Philip Erb and Blair Booth) were happy to have Billy sing on their records. The track Cinemas Of The World appeared as a 12″ extended version and a 7″ mix. It didn’t sell. Nor did the subsequent Uno album “Uno” which also featured Jimmy Sommerville. So here is Billy in the hard-to-get-anything-released days of 1987.

Going back further in time, the first Associates album “The Affectionate Punch” is always worth a listen.

Released in 1980, it is a stunning debut and a strange mixture of Bowie, Roxy and breathless gallivanting bravado and still an exhilarating listen. The title track is a total blast and “A Matter Of Gender” is a surge of a song to hear at any time. But one song which connected with me back then and still finds its way onto my car-cassette is “Logan Time”.

I don’t know what the song is about, but at Liff (just down the hill from Auchterhouse) there is a road called “The Logan” and the Loganberry was developed in the berryfields around Dundee. Maybe it is about that time of year, maybe it is about something else entirely. Probably. But the song is a career highlight vocal performance from Billy and shows a maturity and musical scope and range which was the mark of Billy MacKenzie and Alan Rankine’s work together.

The image above is a view of the Sidlaw Hills by MacKintosh Patrick. Billy spent a lot of his time here at Scotstoun Cottage. He would walk his dogs over the fields and up around Auchterhouse Hill. 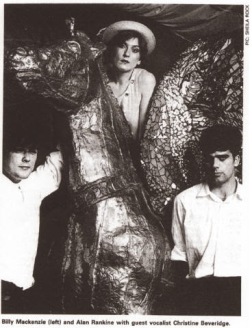 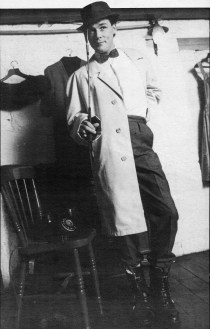 Billy was forever creating new Associates (whoever he was recording with was an Associate). His entire career is one long list of collaborations from Strange News, Skids, Orbidoig, Annie Lennox, 39 Lyon Street, Yello, Uno, Loom, Apollo 440, Barry Adamson etc. The list is a very long one.

This version of Simon Dupree and The Big Sound’s “Kites” was an early contract- challenging release where Billy was allowed to record a single for another label but was forbidden to sing lead vocal on the A-side of any such single. Christine Beveridge found herself breathlessly whispering a nervous lead vocal while Billy belted out the choruses lying on his back on the studio floor.

I love the arrangement on this 12″ version. It grooves along with fellow Associate Alan Rankine covering the instruments. It was released in May 1981 and didn’t trouble the charts. I think it is a total gem and typical of Billy and Alan’s rapid working methods during 1981-82 when a prolific period saw no less than eleven singles recorded and released.