Notwithstanding that the ‘A’ side of this single featured very recently in Sid Law’s wonderful mini-series, as I have a copy of the 12″ single it merits a slot within the Saturday Single.

39 Lyon Street was a one-off single project created by Associates. The group used an alternative name to exercise a clause in their contract with WEA that stated they could record for any label they desired, so long as the A-side was not credited to Associates. 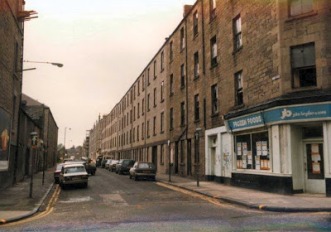 This is how Lyon Street looked back in the 1980’s. A typical Dundee street that you would pass going into the city centre. In the early 80’s, however, something was brewing at number 39. A wee social gathering of creative musicians were busy producing acts who would go on to record some classy alternative pop music.

This is where Billy Mackenzie & Alan Rankine of The Associates were living, along with others. In amongst the others were Christine Beveridge & Steve Reid who went on to record as Orbidoig, releasing a couple of singles. A cross-pollination of The Associates & Orbidoig created a 3rd act called…39 Lyon Street. They also released a single, called “Kites”, which was a cover of the Simon Dupree hit from the psychedelic 60’s.

And here we are:-

And that dear readers, brings to an end this alphabetical and numerical run through some of the 45s that I have in the cupboard of vinyl or shelves of CD from Scottish acts.

Next week, I’m going to start all over again but this time looking at albums as well as singles or indeed featuring songs that I only have via compilations.