A brilliant educational posting all the way from New Zealand….. 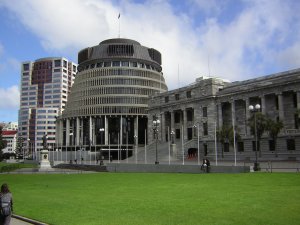 Hey JC, like so many others I’m rapt you ‘got back up again’, thought I’d offer a submission for your favourite/memorable political protest song series.

I grew up listening to a lot of punk music so have many faves from the likes of Crass, Conflict, Blitz, Anti Pasti, Stiff Little Fingers, Dead Kennedys etc, but didn’t think many were really vinyl villain material… considered Orange Crush by R.E.M. and My Brain Is Hanging Upside Down (Bonzo Goes To Bitburg) by The Ramones, both of which are great, but have decided on something perhaps you and most of your readers wouldn’t be familiar with.

Culture by The Knobz came out in 1980 as a response to the then NZ prime minister Rob (known as ‘Piggy’!) Muldoon’s refusal to lift a 40% sales tax on recorded music (he thought pop music was “horrible” and had little or no cultural merit)

Probably considered one hit wonders (think they put out a couple of other singles and maybe an album) it’s a pretty catchy song and did quite well in the NZ charts, tho I doubt it got heard much outside of NZ.

The line “I can buzz around like a beehive boy…” refers to politicians – NZ’s (newer) parliament building in Wellington is known as the beehive because of its shape.

Probably more ‘memorable’ than ‘favourite’, hope this might be of interest to you, all the best with the new blog