I first heard this piece of magnificence courtesy of its inclusion on a tape compiled by Jacques the Kipper:-

The song was originally released as the b-side to Let’s Go Crazy in 1984 (in edited form for the 7″) and later again in 1986 on the 12″ version of Girls & Boys. I feel however that I must warn readers, who may be easily offended, that the song features some sweary words. Or maybe he is really saying funk……

The song is significant for being the recording debut of Sheila E, the singer/drummer/percussionist who would not only become integral to the output of Prince over the next five years but would later go on to enjoy a reasonably successful solo career. I was also intrigued by the fact that among the small number of acts who have been brave enough to tackle a cover version are this lot who got a mention on T(n)VV a short while back for what I had thought would have been the one only time and so I went out and tracked down the CD single on which it appears as a b-side.

It sounds, rather sadly, like a wedding band’s take on it.  Limp and hugely uninspiring.  And a contender for a place in the Top 10 worst covers of all time which is shaping up for a post at somepoint in the future. 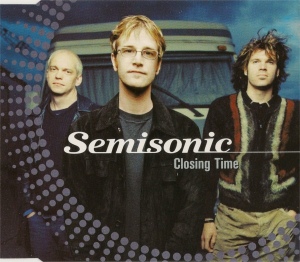 I’m posing the question as a number of you were happy enough to come out in admiration for Just Like Fred Astaire when it featured and this, from 1998, is another of my guilty pleasures.

I only own one Semisonic album and it was bought on the back of hearing Closing Time on the radio. It just struck me as one of those great alt rock love songs that don’t come along all that often and it was one of those occasions where the choice of buying a single for £4 or an album for £12 was a no-brainer (and typing that is also an awful reminder of just how much the music industry was prepared to rip us off back in those CD crazy years).

The album was called Feeling Strangely Fine but it didn’t do all that much for me and indeed it has been many years since I’ve played any Semisonic songs other than the featured track. But I’ll throw in the two other songs lifted from it and released as singles:-