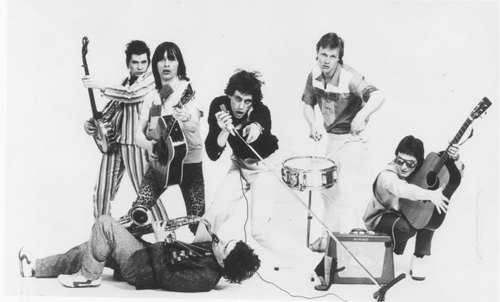 The great man once said in an interview not long before he died:-

“I get a lot of credit for the 42 bands I put on television for the first time – but, to my real credit, only I know the 533 bands I didn’t put on television. I was right about every single one of them, including The Boomtown Rats.”

It is true to say that The Boomtown Rats were a band who struck lucky when punk/new wave came to the fore for they found some fame and the fortune on the back of the movement despite not really ever being accepted by the cognoscenti as being a part of such scenes. Some of their early singles did however, have a new wave feel thanks to them being raw, fast and a bit shouty. But then again how could it really be new wave if there was a big reliance on a saxophone?

The tail end of 78 and early 79 was when the band went really big thanks to consecutive #1 singles with Rat Trap and I Don’t Like Mondays, both of which (particularly the latter) you will still hear on many retro radio stations the world over. I’ll admit to quite liking the band and they were one of the first acts I saw when I started going to gigs in 1979, although in this case it was as much to do with going along to the Glasgow Apollo as a favour to a mate.

It was however, one of the more memorable of my early concert-going experiences  in as far that 35 years on much  I can recall more detail from it than most – mainly because the Boomtown Rats had the idea that a gig should be more than just taking to the stage and playing the songs….there was a decent set built to accommodate the band, the stage was well-lit and the sound, surprisingly for a new wave band, was exceptionally good.

You can look up wiki if you want to know more in terms of the discography, the break-up and the 21st century comeback of sorts with a knight of the realm now on lead vocals. I’ll just leave you with two of the early rawer singles that I pogoed to in the crowd when I was just 16 years old:-