A GUEST POSTING by SWISS ADAM 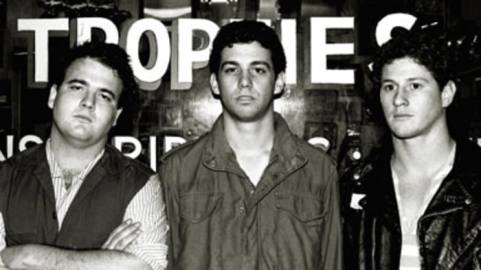 This could well be the shortest ICA in the series, in terms of running time (unless someone puts together a Napalm Death one). It could comfortably fit on a 10” single. It would be the best 10” single ever made. It would be called Our Band Could Be Your Life, which is the line from a song that defines Minutemen, their relationship with their audience and their no stars, we’re just like you approach.

Minutemen were from San Pedro, a naval town in Southern California. Inspired by punk, they made some highly individual and inspiring music before the untimely death of frontman D. Boon in 1985. Formed by D. Boon and bassist Mike Watt, and then joined by drummer George Hurley, they took their childhood influences (60s and 70s rock mainly) and the thrust and directness of punk and started their own thing. As D. and Mike saw it, punk was about a) DIY and b) being an individual. They believed that a band had to bring their own thing to the punk scene- it was no good sounding like anybody (or everybody) else, being different from everybody else was the thing. They separated the sound of the group, guitars taking to treble and bass the low end. Too often D complained, the guitarist ‘bogarted the bass’.

Minutemen had sonic separation with each man king of his own kingdom. They married this to their philosophy of ‘we jam econo’, a do it yourself, thrifty approach to touring, playing and recording. They drove their own van, unloaded their own gear, set it up and then put it all back on the van afterwards. The songs were short and taut, rarely over two minutes, sometimes around one minute, taking in punk, funk, jazz and rock, but sounding like no one else except the Minutemen. All three men wrote tunes and words, each bringing different stances and approaches, D often being more direct, Mike more obtuse and artier, George bringing in songs from somewhere else. Between 1980 and 1985 they put out 4 albums and 6 eps, containing dozens of songs and criss-crossed the USA building up a network, an underground, an alternative to the mainstream sound and politics of the USA under Reagan.

D. Boon died when the band van crashed returning from a gig and with that they were over. Mike Watt went on to play with other groups, not least the reformed Stooges and Sonic Youth as well as his own projects but he still sees himself defined by his first band and his friendship with D. Boon. He once said ‘when people ask me what sort of bass player I am I say, ‘I’m D. Boon’s bassplayer’.

Fizzing with ideas and riffs and a social conscience D Boon writes this song on a beach in Mexico watching a woman pick up beer bottles to take back for the deposit, a song of sympathy for the locals trying to survive among the US holiday-makers. In this simple act he sees ‘the dirt, scarcity and emptiness of our south’, the price people pay for being poor and living in a greedy, unequal world. Ten lines of poetry set to blistering Tex-Mex post-punk. It is on their 1984 double album Double Nickels On the Dime, released by SST on the same day as Husker Du’s double opus Zen Arcade. D wrote I Felt Like A Gringo inspired by the same trip and events.

Little Man With A Gun In His Hand

From their 1980 debut 7” single, a short, thumping, calling card. It probably took longer to type this sentence than it does for this song to play.

Mike Watt write this song for Michael Jackson to sing. He thought that if the King of Pop sang it, everyone would know who the Minutemen were. He sent it to Jackson’s management. He didn’t hear anything in reply and as far as I know Jackson never recorded it.

George wrote this one, about a dream, written half-awake in the early hours. I always thought the anchor referred to Watt’s bass, dragging behind, but that might just be my interpretation.

The Price Of Paradise

This song is on their attempt to make a mersh (commercial) record, Three Way Tie (For Last) in 1985, the group frustrated, trying to write pop songs and make some sales. Didn’t work obviously. A song about the Vietnam War, something they visited fairly often, something that made an impression on them through their TV screens as kids. Vietnam was big in the 80s, even over here, as those of us that as teens watched Apocalypse Now! and Platoon and Sounds Of The 60s can testify.

This one’s from their 1983 album, What Makes A Man Start Fires? which came complete with Raymond Pettibon drawing on the cover, an album they considered to be their first proper record (one night to record it, two nights to mix it and record a few overdubs). It is a tribute to Bob Dylan as well as a parody of his lyrics. There are 18 songs on What Makes A Man Start Fires? And honestly, I could have included any of them but this one, the album’s opener, always grabs me.

Let’s just about close with a moment of truth and beauty. History Lesson Pt II is the story of D. Boon and Mike Watt growing up, the effect punk rock had on their lives and how they saw the world. Over a gentle, circling guitar riff and spartan bass and drums D. Boon half sings, half speaks the words-

To close. It just seemed to fit.