A GUEST POSTING by DAVID ASHLEY 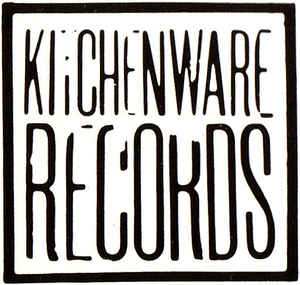 JC writes  …………..ignore the pish that I wrote last week about having no more guest ICAs in the pipeline – there were two that had been received some time ago and filed in wrong places…..there’s also been a couple more submissions in the past few days and I’ve even got my own arse in gear and put one together.  So things are looking good on the ICA front for a while yet.  Time now to hand you over to David.

A while back there was some discussion in the comments about an ICA for record labels following the excellent Factory one so thought I would give one a go. I’ve chosen Kitchenware and specifically the early period in Kitchenware’s life. Modelled on Postcard and started in Newcastle in 1982 by the 21 yr old Keith Armstrong , then manager of the city centre HMV (for a while the label was run in shop’s basement). From the start the labels aim was to have chart hits with early releases and live shows set up to get licencing deals with the majors. The golden period for me is when the had their own fab 4 , The Kane Gang , Hurrah!, The Daintees and Prefab Sprout. All 4 bands would go on to make better records but there is something about these early releases all from when i was 16 / 17 years old that have stayed with me.

The label had other acts come and go later on including the wonderful Fatima Mansions and had a bit of renaissance with Editors but the romance had gone and they stopped being an essential ‘buy every release’ label. Kitchenware is, sadly, no more , another victim of the endless march to digital and streaming.

I’ve slightly cheated with a 12 track ICA, 3 tracks from each band…..

Gun Law by The Kane Gang

Lead off track from The Kane Gang’s first LP, this hasn’t dated that well. I love the fact the ambition for a big sound kind of out strips the production, evoking the wild west of the north east if that isn’t a contradiction in terms. The Kane Gang were a 3 piece and much more soul than jangly guitar based. Unfortunately the band got most airplay from being responsible for the awful “oohh Gary Davies” jingle on radio one. If this means nothing to you then you are truly blessed.

Lions in My Own Garden (Exit Someone) by Prefab Sprout

Featured before on VV but this less than 3 mins bit of magic is worth another spin. Initially released on the band’s Candle Records , the band came to Kitchenware’s attention when Martin McAloon (band’s bass player) wandered into HMV and asked Keith Armstrong if he would stock the single. Inspired by Paddy’s then girlfriend leaving for Limoges in France. There is something in “The rumours have started that we are both young” that chimed with a 15 year living in the Flatlands. Still one of the best things they have done.

Hip Hip by Hurrah! (the ! is important)

Another slogan just made for growing up to “Are you scared to get happy?” became a bit of a rallying cry for the label as a whole. This was the band’s second single and they reached their peak with the Boxed compilation that pulls all the tracks from their first four singles together. After that if was Leather Jackets , named producers and tours supporting U2.

Look Down Look Down by Martin Stephenson and the Daintees

Signed to the label after busking outside of hmv in Newcastle , the band released a couple of singles before the debut Boat to Bolivia came out. I bought this purely on the basis that it was on Kitchenware. The personal autobiographical lyrics and the hotch potch of styles all shone through a pop lens meant it is still one of my all time favourites. This tale of teenage suicide truly comes to life when played live but the album version is non too shabby as well.

Closest Thing to Heaven by the Kane Gang

This gave the label its first chart hit , even if it did need the might of a major behind it to make it happen. I think this has dated okay.

The first Prefab Sprout LP came out in 1984 by which time the band had been playing live for over 5 years and Paddy had already got a large collection of songs written. For Swoon they decided to record the songs that they found too difficult to play live with the off tempo changes and sudden shifts in direction that Paddy favoured in his writing. As a result when I heard it Swoon felt very different to both the first 2 singles and any thing else around at that time. Cruel is a great example and also backs up a universal truth that every Prefab Sprout song. has at least one line to die for. “the world should be free but don’t you go following suit”. If you hunt around on You tube there is a version covered by Elvis Costello

The Sun Shines Here by Hurrah!

First single by Hurrah! And sounds like it was recorded in a biscuit tin , but boy do I love this. With these early releases Hurrah! were seen as the ones most likely to but it never really happened as the jangle was replaced with a bit of Rock that horrified me at the time. Remember sending away for this and getting a copy in the post from the label. I thought it was the future of music. Listening back I can’t really judge it as I am immediately taken back to a time of fanzines and singles arriving in the post, pouring over lyrics and planning our own bands (The Insistent Porpoises were doomed before they began)

Trouble Town (83 version) by Martin Stephenson and the Daintees

A different version was released as a single (much more sparkling and shiny version complete with jarring backing vocals) I kind of like this earlier jazzier version though . “Its such a mundane way of life , I can hardly breathe” captures the claustrophobia of growing up in a small town in the fens

Crease in His Hat by the Kane Gang

Another track from the Bad and Lowdown World of The Kane Gang. I still love this it has the ache that a lot of my favourite songs have. The band went on the make a much more polished LP in Miracle which got some success in the US and in Motortown has at least one fantastic song on (if you like your pop without the crunchy bits). I think the band suffered from being a bit well characterless , the shared vocal meant there wasnt really a lead man as a focus. Nowadays they would probably be writing songs for Adele or someone.

Walk On by Prefab Sprout

B side of 2nd single The Devil has all the Best Tunes. Even with the simplest of tunes , there are still unexpected pauses and strange time patterns, “ and in the morning you are as certain as the light”

This Boy by Hurrah!

Listening back to this I can hear that they were really a rock band at heart, trapped in bedroom, however those harmonies and chiming guitars are pure summery pop.

Crocodile Cryer by Martin Stephenson and the Daintees

When Kitchenware eventually moved to some offices they used the top floor as rehearsal space leading to quite a bit of cross band working. This song inspired by Martin Stephenson’s grandmother’s funeral is at its best on the debut LP , but this is an earlier version produced by Paddy McAloon. As with all the best lyrics , the beauty is in the details , the fact that it is Elton John records playing upstairs somehow fits perfectly.

If you are interested here is a couple of links to a special by The Tube on the 4 bands featured. Looking at the Kane Gang clip , they really were the uncoolest looking band going