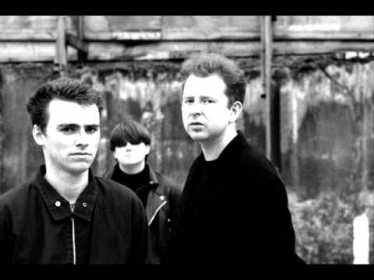 Now, it may well be that the blog attracts more than one reader from Chile, and if so, then I’m thrilled beyond belief. I do know that Ozzy (or Osvaldo to give him his ‘proper’ name) has been a regular for a few years, sending me the occasional e-mail with thoughts, observations, and the occasional request, such as just before Christmas when he said:-

“Any chance of uploading something by Biff Bang Pow!? I heard ” Hug Me Honey” on 80s forever (an online radio station from Switzerland). The album is Sad-eyed Girl (1990). I got the previous one The Acid House Album. It sounds good.”

I’m always happy to meet requests as best I can, but I only have five songs from Biff Bang Pow! on the hard drive, and all of them have through compilations. But I’m getting ahead of myself. Here’s wiki:-

McGee had previously been in the band The Laughing Apple, who released three singles in 1981/82. After moving to London, he formed a new band, Biff Bang Pow!, taking their name from a song by one of his favourite bands, The Creation. The first release on Creation Records, “’73 in ’83” by The Legend! came with a flexi-disc featuring Laughing Apple’s “Wouldn’t You”, a song that would later appear on the first Biff Bang Pow! album.

The initial Biff Bang Pow! line-up was McGee on guitar and vocals, with Dick Green on guitar, Joe Foster on bass, and Ken Popple on drums, these recording the first 2 singles “50 Years of Fun” and “There Must Be A Better Life”.

Dave Evans then replaced Foster (who went solo as Slaughter Joe), and guitarist/organist Andrew Innes (later to join Primal Scream) joined on a part-time basis. Debut album Pass The Paintbrush…Honey was released in early 1985, displaying a mixture of mod, psychedelia, and new wave influences. 1986 saw arguably the band’s strongest album The Girl Who Runs The Beat Hotel, which expanded on the first album’s psychedelic and sixties pop influences, and featured collaborations with artist/painter JC Brouchard. This album coincided with the peak of the first wave of indie pop and as this gave way to shoegazing and grunge, Creation Records also moved in that direction, with the label increasingly being associated with artists such as My Bloody Valentine and Ride. With Biff Bang Pow!, however, McGee continued with guitar pop, becoming increasingly melancholy with releases such as Oblivion (1987), Love Is Forever (1988), Songs For The Sad Eyed Girl (1990), and Me (1991), which proved to be the last album proper by the band. Two compilations, L’Amour, Demure, Stenhousemuir and Debasement Tapes were subsequently released on Creation, with Bertula Bop released in 1994 on the Tristar label. A further collection, Waterbomb, compiled by Joe Foster, was released on Rev-Ola in 2003.”

Here’s four of what I have and where they were taken from:-

The fifth track appears on a boxset I bought last year, Make More Noise – Women In Independent UK Music 1977-1987. And yet, the wiki bio of the band is exclusively male…..

Here’s the blurb in the boxset:-

Christine Wanless was a veteran of the scene which grew up around Creation Records in the mid-1980sby the time her self-penned ‘If I Die’ appeared on Biff Bang Pow’s The Girl Who Runs The Beat Hotel album in 1987. Having been part of the near mythical Formica Tops, Wanless, who was officially a member of Revolving Paint Dream (who shared members with Biff Bang Pow), had been present on the label’s second single, was involved with label mainstay Andrew Innes and would become Label Manager as the venture grew. if i die was a standout on an album many consider to be Biff Bang Pow’s finest:-

Hope that’s put a smile on your face, Ozzy.

I debated this one in my head.  Some would argue that Biff Bang Pow! were a London band given that was where they were formed.  But as they centred around Alan McGhee I’ve decided they merit a place in this series.

McGee had previously been in The Laughing Apple who had released three singles in the early 80s.  Having moved from Glasgow to London he formed Biff Bang Pow!, whose initial  line-up was McGee on guitar and vocals,  Dick Green on guitar, Joe Foster on bass, and Ken Popple on drums but after two singles Dave Evans replaced Foster (who went solo as Slaughter Joe), while and guitarist/organist Andrew Innes (later to join Primal Scream) joined on a part-time basis.

They were naturally part of the Creation label and over a seven year period they released a total of 13 singles or albums none of which sold in any huge quantities.

I only have one of their songs and it came courtesy of its inclusion on a compilation CD:-

I’ve done some digging and discovered it is the b-side of a 1988 single called She Haunts which I had a listen to on-line and thought was half-decent.