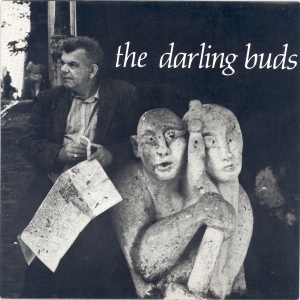 Last week’s posting on Talulah Gosh made reference to them helping pave the way for the chart success for The Darling Buds, another of the bands to feature on CD 86.

This lot formed in 1986 in Caerleon a village not far from the Welsh town of Newport. They were fronted by a young, ballsy, peroxide blonde named Andrea Lewis with Geraint Farley (guitar), Chris McDonagh (bass) and Richard Gray (drums) being the three blokes few people paid attention to.

They released their a self-financed debut single in February 1987 before shifting to the Sheffield-based Native Records and almost from the word go were branded as a cross between The Beatles and Blondie…proof, if any was needed, that lazy journalism isn’t exactly a new phenomenon. From the outset, this was a band that always had a chance of making it big for the simple fact that they made music that would sound good on daytime radio. Oh and it also helped that their singer has the sort of looks that made picture editors hearts go all-a-flutter.

It was no real surprise that they signed to Epic Records whose marketing and promotional campaigns took the single Hit The Ground into the charts and got the band onto Top of The Pops where all the watching dads went ‘wow’. The debut LP Pop Said also did well, critically and commercially, reaching #23, aided by it spawning five singles, all of which were played regularly on daytime radio.

Crawdaddy was a less poppy affair altogether which had the double whammy of disappointing the label bosses yet failing to attract a broader fan base. The hit singles dried up and so too did the marketing money and promotional opportunities.  However, unlike many others in a similar situation The Darling Buds weren’t dropped and a third album was released in October 1992. To the bemusement and indeed amusement of many, the band had called the album Erotica and had released it within a week of Madonna releasing her allegedly notorious album of the same name. Someone, somewhere taking the piss.

By now the band were determined to crack the American market and spent much of 1993 trying to do so through touring relentlessly. This took its toll on all concerned and by the end of the year they had disbanded.

Like many others, they have since reformed. The first time was in July 2010 for a one-off concert and then again in 2013 to play at indie festivals and shows. Such was the interest in the band from old and new fans alike that they have continued to perform on a reasonably regular basis ever since.

CD86 featured their rather splendid buzzsaw guitar debut single which was limited to a run of just 2000 copies:-

and here’s yer more than decent b-side which reminds me a lot of Shop Assistants:-

mp3 : The Darling Buds – Just To Be Seen

The single was re-recorded and put on the b-side of a later single and then again many years later on a de-luxe re-siisue debut album.  It’s good but not in the class of the original.

mp3 : The Darling Buds – If I Said (later version)

** and thanks to The Robster for correcting the two inaccuracies in the original post. (see comments for clarification!!)