A GUEST POSTING by CHARITY CHIC

I find it hard to believe that in the long and eclectic list of ICAs that no-one has offered up one by the great King Creosote.

He started the now legendary Fence label in 1998 initially to release his own music burnt onto CDRs (anyone remember them?)

This led to the Fence Movement where he was joined by and released music from the likes of The Beta Band and James Yorkston.

For more information and a terrific read can I recommend Vic Galloway‘s book the brilliantly titled Songs in the Key of Fife – The Intertwining stories of The Beta Band, King Creosote, KT Tunstall,James Yorkston and the Fence Collective.

All of this was sadly before he first crossed my radar. It would be approximately 10 years later before I began to pick up his releases and looked to acquire stuff from his back catalogue. If anyone has stuff from his early Fence years, a follow up ICA would be very welcome.

After that rather lengthy preamble, let’s get to the music selections.

Something to Believe In – from the album From Scotland with Love on Domino, 2014

KC (as I will use from now on in) was commissioned to write the music to accompany the documentary of the same name directed by Virginia Heath which was commissioned as part of the cultural festival accompanying the 2014 Glasgow Commonwealth Games. It quickly became his best selling album to date and on a number of occasions it has been played live in its entirety. I saw it performed in a very eerie Royal Concert Hall on 12th March a couple of days before lockdown in 2020.

Sometime to Believe In is the opening track full of hope and optimism. I posted it on the day of the 2014 Scottish Referendum.

I think that this may well have been the first of his records that I bought (cheaply from Fopp). Again the opening track and again another statement of intent.

The only thing I have of his on Fence, albeit it was a charity shop acquisition from Spring 2021. I can’t remember where, and have since started to keep a note of where I buy them. This one was certainly a bit of a find.

My first charity find from the great man from BRICC in Ballantrae.

0.25 Back to sweetness now, with a lovely finger-picky guitar line. “You know when hands touch/And there’s that spark of electrical something or other?” I do! What a softie.

Bats in the Attic was an EP with KC accompanied by electronica musician Jon Hopkins with JH’s field recordings accompanying KC’s songs inspired by the East Neuk of Fife. A Mercury Prize nomination, it was the first I bought when it came out.

His first record since From Scotland with Love and as far as I am aware his most recent new release. He is certainly less prolific than he was in his early years. An album I find a bit patchy with this, the opening track, being the pick of the bunch.

Leaf Piece – from From Scotland with Love

I could have chosen anything from the album for its second contribution, as they are all of a very high standard. I went for this one primarily because in contains the lines

For now my tongue is held

And my wheesht is haud

If you know, you know

You’ve No Clue Do You – from Bombshell

“the new single – and what a chug-along monster it is, full of crunchy drums, deft puns, and some nice Cluedo banter “ The Guardian

A lovely song for his daughter. The Earlies provide musical accompaniment

Nothing Compares to You

The only non album track.  Better than Prince‘s original, but is it better than Sinead O’Connor‘s version?

The jury is out

Kenny Anderson,  known primarily by his stage name King Creosote, is an independent singer-songwriter from Fife, Scotland. To date, Anderson has released over forty albums, with his latest, Astronaut Meets Appleman, released in 2016. Anderson is also a member of Scottish-Canadian band The Burns Unit. In 2011, Anderson’s collaborative album with Jon Hopkins, Diamond Mine, was nominated for the Mercury Prize and the Scottish Album of the Year Award.

After having featured in Scottish bands Skuobhie Dubh Orchestra and Khartoum Heroes, in 1995 Kenny Anderson launched Fence Records, alongside Johnny Lynch, and began recording albums under the name King Creosote.  He eventually stepped back from day-to-day running of the label in 2010.

In recent years, Anderson has teamed up with Domino Records who have co-released some of his albums. He also spent some time on Warner subsidiary, 679, which gave him major label backing for the first time. His increasing frustration with the music industry and how digital recordings are becoming throwaway commodities led him to release his material in small, vinyl only runs which were largely only available at concerts.

Today’s track is taken from the LP, KC Rules OK released in September 2005. The album’s liner notes state that its songs were written between 1988-2003. The backing band were The Earlies, an English/American four-piece who have been described in the media as folk-psychedelia and as country-meets-prog-meets-electronica symphonies.

In December 2009, KC Rules OK was ranked #6 in a local magazine’s “Scottish Albums of the Decade” rundown.

mp3 : King Creosote – I’ll Fly By The Seat Of My Pants

In 2014, I was lucky enough to be helping out with the arrangements at this unforgettable day of music.

King Creosote was headlining the second of the big gigs but as a warm-up, he turned up, unnanounced, in a local pub, and played three songs standing next to the fruit machine as locals looked on in wonderment. I’d been tipped off this was going to happen and got myself along….and stood no more than five feet away as it all unfolded.

It was sublime, sensational and unforgettable

PS: Just remembered I took a hasty and poor quality photo while KC was performing in the pub…. 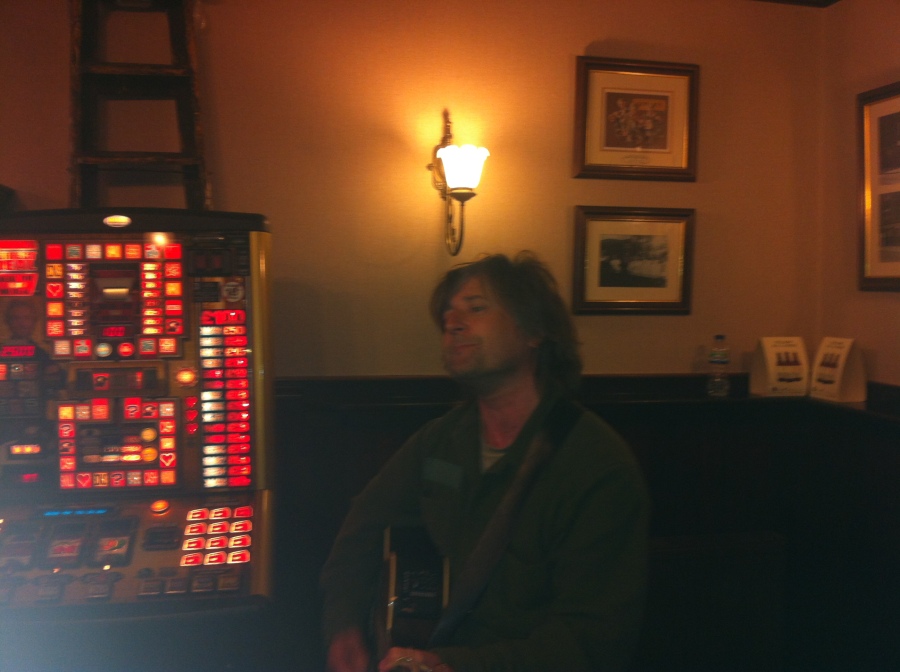 Kenny Anderson, known primarily by his stage name King Creosote, is an independent singer-songwriter from Fife, Scotland. To date, Anderson has released over forty albums, with his latest, That Might Well Be It, Darling, released in 2013.  Anderson is also a member of Scottish-Canadian band, The Burns Unit. In 2011, Anderson’s collaborative album with Jon Hopkins, Diamond Mine, was nominated for the Mercury Prize.

Anderson’s brothers are also musicians: Ian Anderson (known as Pip Dylan) and Gordon Anderson (Lone Pigeon) – who is lead singer and main songwriter with The Aliens. The three frequently collaborate at live shows and on album releases.

After having featured in Scottish bands Skuobhie Dubh Orchestra and Khartoum Heroes, in 1995 Kenny Anderson launched the Fence record label and began recording albums under the name King Creosote.

Anderson founded Fence Records alongside Johnny Lynch, but stepped back from day-to-day running of the label in 2010.

In recent years, Anderson has teamed up with Domino Records who have co-released some of his albums. He also spent some time on Warner subsidiary, 679, which gave him major label backing for the first time. His increasing frustration with the music industry and how digital recordings are becoming throwaway commodities led him to release his material in small, vinyl only runs which were largely only available at concerts.

To this end, KC Rules OK was re-released in 2006 with different versions of some songs, and a version of the album called “Chorlton and the Wh’earlies” recorded with The Earlies was available with some purchases. Bombshell was released with an additional disc, a DVD film of King Creosote and friends on tour.

In a June 2008 interview on BBC 6 Music, mistakenly introduced as “King Creole”, he told Tom Robinson that he’d like to play a festival every weekend this summer and then return home for the weekdays.

In the 2007 film Hallam Foe two of his songs, “The Someone Else” and “King Bubbles in Sand”, were featured.

In late 2009, Anderson released a new studio album Flick the Vs, and crafted a performance only album, entitled My Nth Bit of Strange in Umpteen Years. Anderson also contributed to the Cold Seeds collaborative album along with Frances Donnelly of Animal Magic Tricks, and Neil Pennycook and Pete Harvey from Meursault; which was released on the Edinburgh-based indie label Song, By Toad Records. Anderson, Donnelly and Pennycook all wrote songs for the project, which all four performers then recorded together; each singer often taking the lead vocal role on a song written by another of the artists. The album was given a special limited release at the Fence Records Homegame Festival in Anstruther, Fife in March 2010, before a general release was announced for June 2010.

In 2011, Anderson attended the SxSW Music Festival and played a number of shows, two of which featured fellow Scottish attendees Kid Canaveral as his backing band. The same year, Anderson released Diamond Mine, a collaborative album with electronica composer Jon Hopkins, to critical acclaim. The album was nominated for the Mercury Prize, with Anderson stating, “It feels like this is the beginning of something. And to feel that so far down the line, after putting out forty effing albums, oh my God! It means, I can still do this, it’s not over.” The duo subsequently released an EP, Honest Words.