It’s Immaterial can be classified firmly in the one-hit wonder category, thanks to Driving Away From Home (Jim’s Tune) hitting the Top 20 in 1986. It was hardly an overnight or sudden success for this Liverpool-based band as they had been kicking around since 1980, releasing a handful of flop singles on small labels and recording four sessions for John Peel at various times.

Hopes were high for the follow-up to the hit single, but despite it being a jaunty and big-sounding number which received a reasonable amount of airplay on BBC Radio 1, it barely scraped into the Top 75.

A three-minute pop gem.  As lifted from the album Life’s Hard Then You Die, a record that at the time seemed a bit of a mess with all sorts of genres and pace of music to absorb but which has actually aged pretty well and offers much to enjoy and appreciate. 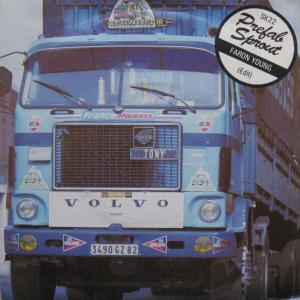 The first time I heard this song:-

I was instantly reminded of this tune:-

The former was a top 20 hit in 1986 for a Liverpool band who had been kicking around without any commercial success since 1980 although they were firm favourites of John Peel for whom they had recorded four sessions by the time they hit the charts….all before a debut album which came out in late 1986.

The latter had been a 1985 single for the better-known Newcastle band but it had stalled at #74. It was also the opening track of the sublime LP Steve McQueen.

I also have a 12″ copy of Driving Away From Home in the collection. It annoys me as it just goes on a bit too long and the song loses something in the process:-

The 12″ also had an additional song on the b-side:-