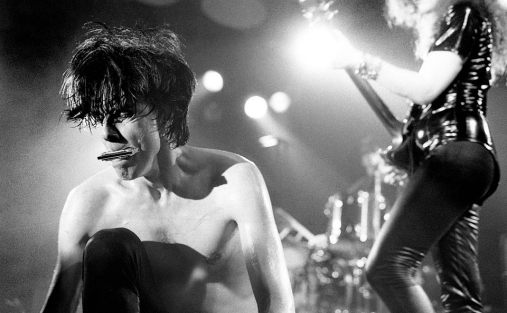 Had I written the below for sexyloser, there would have been no big need to be careful: I mean, there are seven readers and all of them are male and on the brink of their retirement, so why should I care?

Here, on the mighty Vinyl Villain, things are quite different. I know from good authority that this place is frequently visited by bright young ladies in their teens … and therefore I obviously don’t want to sound like a dirty old man when I try to describe why I love The Cramps as much as I do. It’s not all rousing vulgarity, it’s much more!

You see, The Cramps were perhaps not the most sophisticated band on the planet. In fact, there are times when I think they were the ones that invented rock ‘n’ roll! And that’s rock ‘n’ roll in the truest sense of the word, including all the dirt and filth it brings within.

If you have a look at the song titles below, you may perhaps already understand what I’m trying to say. I mean, ‘Bikini Girls With Machine Guns’?! The title alone tells you quite clearly that they won’t marry in the end, right? So, this band is nothing for romanticists, that’s for sure. Go on, listen to The Smiths instead!

The Cramps were Lux Interior on vocals and Poison Ivy Rorschach on lead guitar and occasionally on bass. And, listen up, romanticists, the two of them were indeed married! Now, I often wondered about Lux’ and Ivy’s family life. You see, when I wake up in the morning, Mrs. Loser and me just talk (although Mrs. Loser doesn’t like to talk much in the mornings anyway, but that’s a different story) about who drives Little Loser to the dentist in the afternoon or who buys some toilet paper when coming back from work. We pretty much don’t spend our time in disputing whether we’re gonna write a song about Zombies eating young girls today or one about young girls crashing Hot Rods!

I had the honor to see The Cramps live back in 1990. They were playing the Pukkelpop festival in Holland together with Billy Bragg, Henry Rollins, The Buzzcocks and Nick Cave. Up until then I was quite fond of what they did, their new album was rather splendid, but they were just a band I liked, not much more. But then everything changed, because their performance simply blew me away …. I fell in love!

There is a video of this gig on youtube, perhaps you have a look at it – or indeed at any other live show – ‘cos it’s rather hard hard to explain what happened on stage there: Lux came up in stilettos with heels as high as my forearm. I’m sure that if Mrs. Loser would wear a pair of those, she’d break her neck before having reached the front door! Poison Ivy wore what I (being not much of a fashion expert) would describe as ‘hot pants’, only they were way shorter than the hot pants I used to know then. Plus a bra. And that’s about it. In 1990 The Cramps had the wonderful Candy del Mar on bass, she looked as stunning as Ivy did, both of them just stood there, like icebound, rarely looking at the audience, just playing their instruments as if their lives would depend on it. Whilst Lux was jumping on the stage like a mad dervish, within the fifth number or so he was almost stark naked, just wearing his stilettos and some provocative lingerie that would have fitted Kate Moss nicely as well! Believe me, good ole’ Nick Cave had a hard time indeed afterwards in cooling down the crowd with his serious business jacket!

What I’m trying to say is: this gig showed me that both Lux and Ivy really lived this way, this hour up stage was not just for show, most certainly not. Of course it’s clear to me that Lux & Ivy needed toilet paper as well, but I’m willing to be that – unlike with me and Mrs. Loser – this has never been their main concern!

Alas, and to my great dismay, Lux died in 2009. Unexpectedly. And that, consequently, was the end of The Cramps. Rightly so, I would think. Lux was irreplaceable and I suppose everyone involved knew that.

Their legacy consists of nine fine studio albums, eight of which I proudly own. Plus a memory of a gig which will never fade, that’s for sure!

Coming back to the song titles: I went for a brilliant new idea in this ICA – series, a “Concept ICA”. Herewith legally ™, by the way! Forget about ‘Sgt. Pepper’ or ‘Dark Side Of The Moon’, here’s the real thing, friends! The concept is: it’s only songs about dangerous women, women you always dreamt about and dream to meet and talk to, to drink with, to spend the night with. And, probably, perhaps, even more. This sex thing, you know what I mean. Problem is, in reality those women wouldn’t even remotely think of returning your look, not for a second! And that’s because a) they are the definition of ‘cool’ and b) you – and me – are not. Not the slightest, to be precise. Unlike Lux. And – as far as said women are concerned – unlike Ivy. Because only the pair of them could wake up in the morning and come up with songs like these:

That’s ten neat tunes, I would think, all about ‘bad girls’ indeed, but it doesn’t include one of the finest Cramps – tunes in all of their back catalogue. So, out of concept, consider this to be the bonus track, if you like:

I do hope the above met with your approval. I know the first two albums are missing, ‘Songs The Lord Taught Us’ and ‘Psychedelic Jungle’. Reason is, they just didn’t fit the concept by and large. I could easily have chosen to do a Cramps – Concept ICA ™ about Zombies and other unpleasant creatures instead , in this case those two albums would have been heavily featured. Perhaps next time, ey?

Until then, enjoy! Especially the person who left a comment elsewhere recently, saying he basically knows nothing by The Cramps. I forgot who said it, but this might as well be for you…..

JC adds…………….This post is the perfect illustration of why I am particularly proud of what the ICA series has delivered over the years.  The guest contributions have been immense for so many different reasons.  I hope the others who have been featured won’t mind me saying that this is probably my favourite yet.  Dirk’s love for the band shines through and he draws out his on-line persona perfectly with his writing (he’s a sweet and gentle pussycat in real life, but don’t tell him I said that!!)

#150 in this series will appear on Thursday.  It’s one of mine that I’ve had on the back burner for a few weeks….but it feels wholly inadequate now.