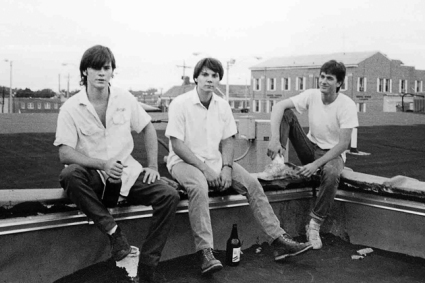 My parents were too young to be beatniks and too old to be hippies, too serious for rock, and had no connection to surf or Motown so, there in the late 50s and early 60s, what they had was folk. From The Kingston Trio to Pete Seeger, Woody Guthrie to Joan Baez. I’m sure it was the combination of my birth in late November of their senior year of college; moving from Portland, Oregon, to Cambridge, Massachusetts, for graduate school; the rigors of grad school at Harvard and Brandeis; then having to leave for St Louis, Missouri, to finish their graduate work at Washington University; and the birth of my brother that meant Bob Dylan, the Beatles, the Byrds, Crosby, Still and Nash, etc. never found a purchase. So, I was raised on 1930s and 50s American folk, at least until I got my own small red round Panasonic AM/FM radio (on a chain) in ’69. We’d moved to New Jersey that summer after my dad finished his PhD and got a job at the AT&T Bell Labs, and I quickly got lost in the insane diversity of popular music available on AM, and FM, radio out of New York City.

But there was always folk… and the best political songs were always folk-ish, and we were a political family in a political time. Now, while my mom grew up the oldest daughter of an MD and a PhD psychologist (rare thing for a woman to earn a PhD in the 30s), both of old New England Quaker stock, my dad grew up in a small post-coal, post-rail, post-paper mill town in the Appalachian Hills of central Pennsylvania. Feminist, race and class politics – in social democratic/reformist varieties – along with anti-war activities and environmental activism ran through our household. All of which is to say that I was 6 and 7 when Martin Luther King, and Bobby Kennedy and Malcolm X and lord knows how many Black Panthers were killed and the long hot summers of urban rioting followed. I was 9 when the Ohio National Guard and Mississippi State Police shot and killed college students. I was 10 for Woodstock (and Altamont) – no, we didn’t go, 12 and 13 for Watergate and the first oil crisis, 15 for the Church Committee investigations into the staggeringly global illegality of the CIA, 16 and 17 for the second oil crisis and the deepening of stagflation and the Three Mile Island nuclear meltdown, and then 18 for the hostages held at the US Embassy in Iran.

But the “folk” music I was getting – I was a in elementary and then high school, right? – was Genesis’s appropriation of pastoral poetry, Led Zepplin’s elves and shit, Dylan’s electric Christianity and, of course, Neil Young. There was sexual politics – Bowie and glam, disco and (homo)sexuality, the questions about Elton John and Rod Stewart’s sexuality, and the Rolling Stone’s Some Girls and Marianne Faithful’s Broken English (slightly different politics there, eh?), but otherwise my friends and I were listening to arena rock, art rock, southern rock (the staple of soccer team parties), bands still active after the 60s like the Kinks, ELO and – for a few – Black Sabbath… and there was Queen and Tom Petty and Boston and Fleetwood Mac and, lord save us, Supertramp and Styx… and Springsteen (I was in New Jersey, after all) and the Grateful Dead. Two people in my high school listened to reggae and one to punk.

As I noted in the Son Volt ICA, there was folk and folk-influenced stuff but, for most kids my age, after there was Neil, there was nothing… nothing from England, Scotland or Ireland resonated, even Fairport Convention was invisible. Post-punk, the paisley underground, and college radio brought it back in dribs and drabs but I think commentators are right that the first Uncle Tupelo record marks the qualitative transformation of people here and there doing this and that to the invention of the genre many now call Americana.

Thinking more about it, on the basis of Robert Christgau’s annual Pazz and Jop polls in The Village Voice, I bought Fear and Whiskey, by The Mekons, and Rum, Sodomy & the Lash, by The Pogues, when I was working in New York and they – each in their own singular fashion – presaged the blending of class politics, folk traditions and punk attitude of Uncle Tupelo…

The first cut, Moonshiner – from March 16-20, 1992 – is a traditional folk song – at least 75 years old – of contested origin… possibly Irish, possibly American, doesn’t matter. There are other great versions of the song – most first heard it from Dylan and more recently Cat Power and Charlie Parr have recorded excellent versions. But Jay Farrar’s voice exudes weariness, not to the point of mourning, but bone deep, inches from worn out, holding on by a thread magnificence… and unlike Dylan’s version the harmonica is searing without wrecking the mix. If you can’t see the hills, the stills, the poverty, the church’s, bars and mines, I can’t help ya.

Screen Door, from No Depression, is sung by Jeff Tweedy, shifts register just a little. The setting is less the mountains and more rural Illinois, it’s heat, sweat, porches, poverty but celebrating the parochial, the intimacy of equal poverty, the human connection when money doesn’t mediate all activities. There’s an insular populism to the tune but also a deep resilience and sense of place. It’s wholly different from Reagan’s “Morning in America” or the reactionary politics of Kevin Costner’s take on Field of Dreams in that it comes from the Midwest rather than projecting onto it.

Jay’s back in the beautiful, Still Be Around – from Still Feel Gone. The lyrics are simple but, and I can’t point to what it is, intimate that the lyrical complexity of his later work in Son Volt is coming. It’s always struck me as a song about alcoholism and those who love and alcoholic. There’s a richness of feeling and a depth of worry but also an inescapable fatalism about lives tied to the Bible being a bottle.

Black Eye – from March 16-20, 1992 – is a working class tune, a song about all that can be lost when you stay in place, playing the role assigned you, being who everyone knows you to be, releasing your dreams and doing your job. Anything that breaks the flow of the mundane, under such conditions, can be a badge of pride… but if it, too, becomes mundane, there’s hopelessness nearby. It’s about the closest Jeff gets to singing a Jay tune… all the songs the band released were credited to all the band members but it doesn’t take much to identify – sonically and lyrically – who was at the core of which song.

Belleville, Illinois, where Uncle Tupelo are from is, or was, a coal mining area east of St Louis. Coal Miner, by Sarah Ogan Gunning, was originally published in 1937 from the perspective of a coal miner’s wife. Also, from March 16-20, 1992, the original title was “Come on All You Coal Miners.” If you’re looking for anti-capitalism, you’ve found a home, here. I first heard this by Pete Seeger long ago and, while Seeger’s was rousing, there’s a mournful fury in Jay’s voice I prefer… it completely belies his age at the time, how someone with fewer than 25 years under their belt has that depth of feeling, I’ll never know.

Steal the Crumbs, from Anodyne, is a pulsing stroll of a song without a real chorus… harkening back to Still Be Around, it keeps walking, rolling on, the poetry and movement building to:

No more will I see you,
So long since I’ve seen you,
Haven’t we both been living the high life,
It flows on the bottom…

Whiskey Bottle, from No Depression. I listened to Jeff Tweedy on Marc Maron’s WTF podcast a few weeks back. Tweedy has a new book out about his life in music and there’s a good bit on growing up in Belleville and Uncle Tupelo. True or not, Belleville was long rumored to have the most bars per capita of any community in the US and a comedian once described the main street as the longest bar rail in America… All of which is to say that a song about a whisky bottle, over Jesus, not forever, just for now makes a good bit of sense for a band from a place of that kind.

I mentioned on the Son Volt IC that Uncle Tupelo blended punk and folk… and, while it’s not included here, they even titled a song D. Boon after the lead guitarist and singer of The Minutemen, one of LA’s greatest punk bands. Boon died in an auto accident in 1985. Along those lines, they’d often cover punk and post-punk songs during live performances and I Wanna Be Your Dog – from 89/93, An Anthology – is their blending of Iggy and the The Stooges and the Bottle Rockets (good friends of the band from a town south across the Mississippi River.)

Another cover, a bit more rocking and with better production, is CCR’s Effigy, from 1993’s No Alternative compilation put together as part of the Red Hot AIDS Benefit series. This starts off once again mournful and quiet and then accelerates and intensifies into an explosion of raw guitar fury after about two minutes. They did this live when I saw then in San Francisco in 1992 and it was glorious. I think it’s far superior to Creedence’s original.

And, just to prove that they had punk rock chops – that don’t quite escape the rest of their acoustic sensibilities – I’ve ended the compilation with Postcard – from Still Feel Gone… and other drinking song but one where I hear escape pending, which they clearly did.