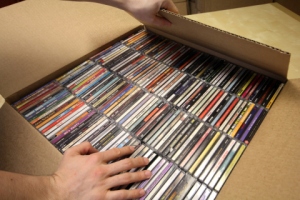 Whats in Your Box Part 10

In reality this is a cover version special, but first a little word about Stanford Prison Experiment as their CD inspires today words.  Stanford Prison Experiment were a hardcore/punk band from California who released a couple of albums in the mid 90s. They were signed to World Domination Records (see Part 6 for more on that) and were led by a certain Mario Jiminez. Their second album The Gato Hunch was supposed to be their breakthrough record but they split soon after its release.

Cansado is taken from that album and to be honest it’s a bit forgettable and for the first time I haven’t posted the main song of the CD. It is standard American punk in the vein of but not as good as Fugazi and Black Flag. What stands this EP out from the rest of the crowd is its selection of B sides. All of them are cover versions. I have included one as the posting , which I have cunningly disguised to see if anyone out there can guess which song it is. Remember this is an LA Punk Band who were around in 1995. A bit of the clue, the song features on an Album which JC included in his recent 50 at 50 series (I think, or was it over at 17 Seconds, I forget). Anyway, cover versions. Everyone loves a good cover.

There are I think, five types of cover version and I will do my best to demonstrate my theory here.

Number One – The make the song your own – Best example I can think of is Wuthering Heights by China Drum. A cover version so good, that I now associate that song with them, rather than with Kate Bush. See also I suppose Hounds of Love by The Futureheads and I am The Walrus by Oasis.

Number Two – Do it for a Film – Difficult because its either going to be ironic, terrible or a cover of a great song. The best example I can think of here is Love Will Tear Us Apart by Honeyroot from film Red Road. Already a brilliant song and few would dare to cover it, but Honeyroot took it and stripped it bare and wrung every last inch of emotion and heatbreak out of It, making it even more beautiful and if you’ve watched the film, you’ll know why. It is in my opinion ‘The Best cover version Ever’. Heck, I thought I’d post it as well as it is so great, but if you don’t already own it, shame on you.

Number Three – The Radio One/Aren’t we wacky/Tribute Album – You are in a ‘Live Lounge’ and you have to do a cover. So you do something awful and make it slightly less awful. Nearly every cover version recorded in Radio One’s Live Lounge is terrible. The only exceptions I have ever heard are Your Song by The Streets (which I put in category 1 now) and The Manic Street Preachers doing Umbrella. Other radio stations are not immune from this (I’m looking at you Six Music, although you are forgiven for The Wedding Present‘s version of Back for Good). See also ironic covers of crap songs by Punk Bands and almost anything on a tribute album.

Number Four – The Why Bother – You do a song and IT SOUNDS EXACTLY LIKE THE ORIGINAL. Pointless. I was listening a few weeks ago to Handwritten by The Gaslight Anthem and after track 12 or something Sliver by Nirvana came on. I assumed the album had finished and had gone into a random shuffle. It took me a full half and hour to realise it was a cover version. It is EXACTLY the same as the original and if you don’t believe me I’ve posted it in all its pointless glory.

Which brings us to Number Five – The Was that what I thought it was – Cover versions that you listen to and go – hang on that was such and such wasn’t it and you have to play it again to make sure. I have an ambient version of Michael Jackson’s Stranger in Moscow that bears no resemblance to the original what so ever. This is where Stanford Prison Experiment come in. So what do you think they have covered – post in the comments section your answers and how long it took to guess, no googling the answer either. It took me to one minute 45 on the second play. JC will get it after 45 seconds or something but good luck.

Have a good week one and all.

It was SW-C’s post that got me thinking about doing a full week of covers so big thanks to him.