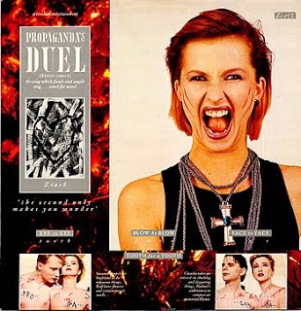 Back in July 2015, I wrote about Propaganda and their debut single Dr Mabuse, released in February 1984. The piece made passing reference to the fact that the follow-up single, Duel, didn’t get released until much later largely as a result of ZTT having to concentrate on the phenomena that was Frankie Goes To Hollywood. I always meant to do a follow-up posting but never quite got round to it until now.

Duel is a lovely bit of electro-pop that fitted in just perfectly with so many of the other musicians I was developing a love for in the mid-80s, and in particular Pet Shop Boys. There was also something quite erotic about the vocal delivery of Claudia Brucken, but visually it was the other female in the band – Susanne Freytag – who really did it for me. The band actually were on UK telly quite a bit around the time of Duel, including a couple of live songs that were aired on Whistle Test on BBC 2 during which they proved, as a live act, they could cut it, albeit there were some backing tapes involved. It was also interesting to see Derek Forbes, formerly of Simple Minds, making an important contribution to the live sound.

It turned out to be the band’s best-selling single in the UK reaching #21 in May 1985 but I always felt the group never got the success it really deserved as the media by now were setting out on a ZTT backlash, sick to the back teeth of FGTH, and arguing that their success was down to the production skills of Trevor Horn and Stephen Lipson and the hype-skills of Paul Morley rather than any talents the musicians might have.  It seemed to be implied that Propaganda were no different despite the fact that anyone who saw them perform on Whistle Test and indeed The Tube on Channel 4 would know these were bona-fide musicians and singers.

The band toured for much of 1985, promoting debut album A Secret Wish. A remix album was issued just before Christmas but the band were strangely absent throughout 1986 and out of the blue came the news that Claudia Brucken was leaving to pursue a solo career.  It turned out that the group had been taking legal action against ZTT as they were unhappy with the details of the recording contract and the label had counter-acted with action that prevented them going elsewhere.  The new-look group did get a move to Virgin Records in 1988 but without the sort of attention foisted on them when they first burst onto the scene,

The 7″ version of Duel appeared on the debut album:-

The 12″ had an extended version along with an industrial version on its flip side:-

I had this crazy notion that I’d go out and find cover versions of all the singles that were released on Postcard Records and pull together a short series for the blog. Indeed it crossed my mind to make it a regular for Sundays over the next few months.

But finding this stopped me in my tracks.

Try as I can, I’m unable to give you anymore info on this amazing piece of footage from Japan. They also lovingly do another great Postcard record:-

Oh well…….here’s the one Postcard cover most folk will be aware of.

And no, that’s not meant as an intentional pun on the video clips which I happen to think are quite brilliant. 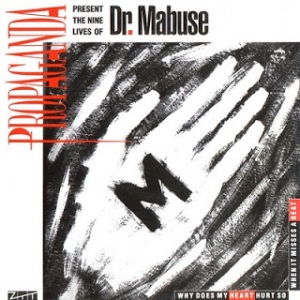 My first exposure to Propaganda came one night at the end of an episode of what by then was called Whistle Test, when a memorable pop promo for a song called Dr Mabuse was played out over the credits sometime around early 1984.

It turned out that this was to be the second single released on the ZTT label – the first being the amazingly successful Relax by Frankie Goes To Hollywood. I was immediately captivated by its charms – it was a big booming tune that offered something different each time you played it. Oh and in co-vocalist Susanne Freytag, they had one of the most stunningly gorgeous women in the pop world.

The single was only a minor hit, peaking at #27, and with subsequent FGTH singles also being multi-million sellers, the relatively small ZTT had to put all its eggs into one basket, so Propaganda were left to one side for the best part of 12 months and it was April 1985 before the follow-up single Duel was released.

For the rest of the year, the band enjoyed quite a high-profile, including a number of TV appearances, live gigs and the release of the debut LP A Secret Wish in July 1985. Incidentally, the vinyl and CD versions of the album are very different – they were released some three months apart, and the CD has extended and slightly remixed versions of a number of the tracks.

I loved A Secret Wish. It was the sort of record I had imagined Simple Minds going onto make on the back of their earliest releases instead of gravitating towards the stadium rock behemoths they were becoming. And it was no real surprise that the Propaganda which went out on tour featured the ex-Minds bassist Derek Forbes…..

Yup, another 80s band besotted by The Velvet Underground…..

Oh and there’s another version of Dr Mabuse also tucked away on the b-side, but it’s just a bit too industrial for my liking today.