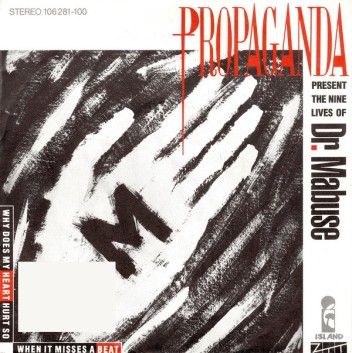 Most of today’s words come from a posting back in April 2015, along with some helpful and/or astute comments that were offered up at the time.

My first exposure to Propaganda came one night at the end of an episode of what by then was called Whistle Test, when a memorable pop promo for a song called Dr Mabuse was played out over the credits sometime around early 1984.

It turned out that this was to be the second single released on the ZTT label – the first being the amazingly successful Relax by Frankie Goes To Hollywood. I was immediately captivated by its charms – it was a big booming tune which offered something different each time you played it. Oh, and in co-vocalist Susanne Freytag, they had one of the most stunningly gorgeous women in the pop world.

The single was only a minor hit, peaking at #27, and with subsequent FGTH singles also being multi-million sellers, the relatively small ZTT had to put all its eggs into one basket, so Propaganda were left to one side for the best part of 12 months and it was April 1985 before the follow-up single Duel was released. For the rest of the year, the band enjoyed quite a high-profile, including a number of TV appearances, live gigs and the release of the debut LP A Secret Wish in July 1985.

I loved A Secret Wish. It was the sort of record I had imagined Simple Minds going onto make on the back of their earliest releases, instead of gravitating towards the stadium rock behemoths they were becoming. And it was no real surprise that the Propaganda who went out on tour featured the ex-Minds bassist Derek Forbes…..

Postpunkmonk, in response to Alex G mentioning that he had a non-standard version of the 7″ of Dr Mabuse, informed us that the single had been “a true game of chance; either the instrumental version or the vocal version was inserted randomly in sleeves and one wouldn’t know one’s fate until the disc was played.”

Propaganda was, in my mind, the greatest achievement of ZTT. Dr. Mabuse is a single that, more than any other, exemplifies the label’s mission statement. It was a crystal production, had literary influence and strove to be post modern pop. A Secret Wish would build on this in an explosive way. Nothing else ZTT released ever had the same impact on me as this single and debut album.

8 thoughts on “IT REALLY WAS A CRACKING DEBUT SINGLE (62)”