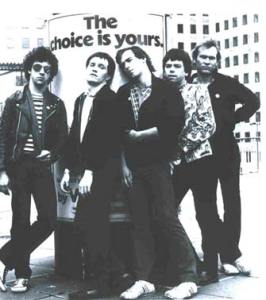 mp3 : The Members – The Sound Of The Suburbs

At the time, I thought it was a great punk record and I used to play it really loud just to annoy the hell out of my old man. Looking back on it now, it was really nothing more than glorified pub-rock with a cracking shout-a-long chorus. Not all that far removed from the sort of stuff that brought fame and fortune to Sham 69.

But quite clearly, us kids love it cos it spoke to us all about how miserable and bring life was and collectively we dragged into the pop charts where it reached #12 in the spring of 1979.

The follow-up single was one that I bought without ever hearing as that’s what you did with your favourite music and bands when you were 16 years old. At the time I hated it……I had no idea what the hell it was about, and to be honest I didn’t really care. Oh and the tune also annoyed me as it reminded me of the appalling Dreadlock Holiday by 10cc more than anything else. History shows that it was all just ahead of its time…..and by maybe around 1983, I realised that it was a genuine classic:-

mp3 : The Members – Offshore Banking Business/Pennies In The Pound (12″ version)

Trivia facts. The drummer in the band got his brother to produce some of the earliest material recorded by The Members. The drummer was Adrian Lillywhite…his brother’s name was Steve….and he went on to become one of the best-known and biggest-earning producers in the 80s and 90s. Oh and he also married Kirsty MacColl.

Offshore Banking Business was a top 40 hit, and many of the lyrics were courtesy of JC Carroll who had been a trainee merchant banker before joining the band. The band never enjoyed any further chart success with any of their five subsequent singles before they called it a day in 1981.

But like many others of their ilk, the chance to relive it all decades later proved too tempting to turn down and since 2007 the band have been on the road and in the studio making music for a living. I haven’t been tempted….