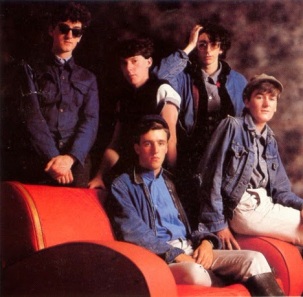 The Bluebells were somewhat unfortunate from a critical point of view to be making jangly pop music in Glasgow at the same time as Aztec Camera and Orange Juice in that there was never the same sort of love for them as the Postcard acts.

However, in terms of the record-buying public they were much more succesful than Edwyn & co, landing three Top 40 hit singles in 1984. They enjoyed a very unexpected success many years after they broke up when, in 1993, Young at Heart was used to great effect in a car advert. The song was re-released and quite incredibly spent four weeks at #1.

The individual members of the band have long been an important part of the music scene in Glasgow and across Scotland. It’s not uncommon to bump into one or more of them at a gig or exhibition, particularly something which links back to the 80s, and they are always happy to talk to fans.

They have reformed on an on-off basis in recent years, playing as support act to Edwyn Collins back in 2009 as he made his comeback after illness and then again as part of a festival celebrating Glasgow hosting the 2014 Commonwealth Games.

Here’s one of their catchiest songs:-

It was a flop on its original release in 1983, but reached #38 the following year.