The Secret Goldfish were formed in Glasgow in 1994 by Katy McCullars, John Morose, Graham Lironi (later replaced on bass by Steven McSeveney) and Paul Turnbull. All of them had previously been involved variously in the local music scene for a number of years, with Katy having been lead vocalist with Fizzbombs, while Paul had drummed with Mackenzies (both of whom have previously been featured in this long-running series).

They signed to the Creeping Bent Organisation, going on to release a reasonably extensive body of work over a five-year period, consisting of three albums and twelve singles/EPs, some of which were split efforts with the likes of Nectarine No.9 and Vic Godard, as part of the Creeping Bent singles club. The band also recorded two Peel Sessions and were part of the Meltdown Festival he curated in London in 1999.

In 2016, the long period of silence came to an end, courtesy of some live shows, for which they were joined by an additional guitarist, none other than James Kirk of Orange Juice fame. A new album with ten songs – seven originals and three covers – came out on Creeping Bent in 2017.

I’ve collected a fair number of their songs via a combination of CDs and vinyl singles, and thought it would be worthwhile, particularly for those of you who aren’t familiar with their material, to listen to a few examples of their work:-

The group continues to be active and just a couple of months ago provided support to an acoustic set performed by The Bluebells.

Creeping Bent, aka The Creeping Bent Organisation, is an independent record label set up by Douglas MacIntyre in 1994, based in Glasgow, Scotland. The label has been described as a successor to earlier Scottish indie labels Postcard Records and Fast Product.

Creeping Bent was officially launched with an event at Glasgow’s Tramway theatre on 12 December 1994 called “A Leap Into The Void” in homage to Yves Klein, and featuring film, theatre and pop music.”Frankie Teardrop”, a 1995 collaboration between Suicide vocalist Alan Vega and Altered Images drummer Stephen Lironi, was an NME single of the week in 1995. Creeping Bent was chosen by John Peel as the featured label when he curated the 1998 Meltdown Festival at the Royal Festival Hall.

The Secret Goldfish were a band from Glasgow who took their name from an imaginary book from the novel The Catcher in the Rye. They released three albums and several singles in the 1990s, on the Glasgow based Creeping Bent record label. Their first album, 1996’s Aqua Pet…You Make Me was produced by Stephen Lironi. Their sound has been described as “sounding much like The Jesus and Mary Chain locked in a public toilet with Jefferson Airplane and The New York Dolls”.

Second album Jet Streams was released in 1997, and in 1999 they issued the Somewhere in the World EP, the lead track of which was co-written by Vic Godard and featured Francis MacDonald and Stevie Jackson. A final album, Mink Riots followed in 1999, before the band split up.

The Nectarine No. 9 was an indie band from Edinburgh, Scotland. Formed by former Fire Engines frontman Davy Henderson in 1991, the band’s music has been described as “dark, moody and brilliant” and “noisy guitar rock with quirky rhythms”. The Nectarine No. 9 released several albums throughout the 1990s and 2000s, and recorded seven John Peel sessions.

And without any further ado, here’s the rather splendid single from August 1999, with the catalogue number of bent042:-

mp3 : The Secret Goldfish – You’re Funny About That, Aren’t You
mp3 : The Nectarine No.9 – Walter Tevis 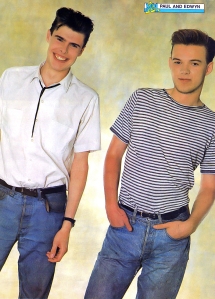 If you thought that the best cowboy/country and western songs date back to the golden era of Johnny Cash or the chart blazing hits of the likes of Glen Campbell or Kenny Rogers, then I provide the following as evidence that 1985 had a wonderful example:-

The follow-up single to Paul and Edwyn’s majestic cover of Pale Blue Eyes, this single on Swamplands Records ended up being credited as a solo recording due to contractual issues Edwyn had at the time.  Despite the single receiving positive reviews in a number of the weekly papers, as well as the teen-orientated mag Smash Hits, it sold poorly and got nowhere near the charts.

Four years later, the song’s composer provided his own take on it, although by making it a b-side on a 12″ single which sold even fewer copies than the Swamplands effort, it too is not the easiest to track down:-

My previous musings on this song over at the old place led to a reader sending me an e-mail with an attachment that contained something quite special.  The audio quality is far from perfect but I’m very proud to have a copy of a version recorded for an early evening show on Radio 1. Worth noting the added harmonica which makes the song sound like a close cousin of What Presence?! and the fact that this recording pre-dates, by quite some months, the release of the song as a 45:-

I’ve also since got my hands on the demo version of the song which was made available on an NME compilation cassette:-

Finally.  Another wonderful reader once sent me a bundle of home made compilation CDs to listen to and enjoy.  Basing his selections on the sort of material I was going on about on the blog, one of the many excellent songs was this very lovely cover:-