A GUEST POSTING by ALEX G

from the We Will Have Salad blog 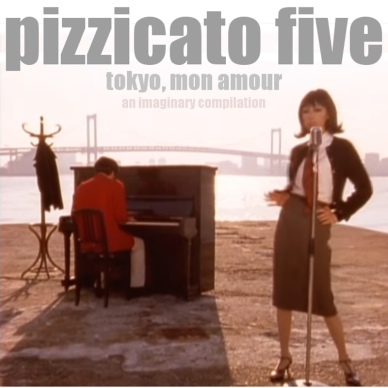 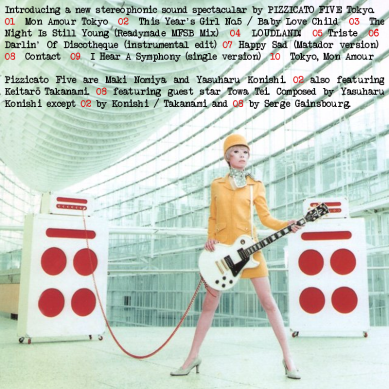 Alright, finally got this ICA finished! Only been sitting on it for about two years…

You have Saint Etienne to thank for this one. Back when Matador Records started repackaging Tokyo band Pizzicato Five‘s music for an international audience back in the mid 1990s, the alleged similarity between the two groups was quite strongly played up (at least in the UK press), and I think this must be the main reason I took a chance on the introductory compilation Made in USA. Apart from the obvious language difference (Pizzicato Five perform mainly in Japanese – there, you’ve been warned!), the comparisons were not unwarranted.

Saint Etienne fans will recognise a lot of the same traits in P5: the merging of sixties pop and nineties dance, the imagination and intelligence that undercuts their dalliances with kitsch, the (then) backroom duo + girl singer set-up (though one of the backroom boys left just as the group were starting to make waves internationally), and more regrettably, a fondness for releasing music in obscure formats that most fans don’t have a hope in hell of ever owning. Just to put the seal on it, Saint Etienne remixed P5 on several occasions, though with somewhat underwhelming results.

Because Made in USA was the album that tastemakers and TV and film editors picked up on the most, it became a “greatest hits” album by default, and it would be too easy for this Imaginary Compilation Album to turn into a slightly modified version of that collection. Fortunately, with Pizzicato Five being so ridiculously prolific, there was plenty of material to choose from. I have included one song which is also on Made In USA, but in a different version, so this imaginary compilation can be considered a sort of companion piece to that real one.

I’m sure that another Pizzicato Five fan might come up with a completely different set of ten tracks, as might I on a different day. “LOUDLAND!” and “Contact” are perhaps the wildest of the wildcard selections here, with “Happy Sad” and “The Night Is Still Young” the safest inclusions, but really there are so many ways you could go with a P5 compilation that even getting close to a definitive selection would be nigh-on impossible. That’s my excuse anyway! What I can say is that this is a selection of tracks I enjoy and I think other people might like too. Which is pretty much the whole point, right?

Introducing your dynamic duo: Maki Nomiya (vocals) and Yasuharu Konishi (keyboards, guitar and backing vocals). I think it’s a good idea to start with the track that sounds most like a theme tune – in this case the theme to a retro action movie, the sort where the hero wears a leather jacket with a beige turtleneck sweater underneath. This was was also P5’s only UK top 75 entry, which surprised me a bit as I don’t remember ever hearing it played anywhere, and there’s another song on this compilation which I could have sworn was a minor hit. Having not played my CD single of this for years, another surprise was that it’s got an English language version on it, and that’s the one I’ve included here. Don’t get used to it, it’s going to be mostly Japanese from here on in…

This is the only song on this collection dating from P5’s time as a trio, featuring Keitarō Takanami on keyboards and guitar. And in case you’re wondering: yes, they did start out as a quintet, but that line-up didn’t last very long. Pizzicato Five were active from 1985 to 2001 but it wasn’t until 1991 that they really found their feet: that was the year that they changed labels, promoted former backing vocalist Maki Nomiya to frontwoman, and shifted away from Swing Out Sister-esque sophisti-pop to the dance-meets-retro style which they continued to explore for the next decade. One of the first fruits was “Baby Love Child”, one of a few P5 songs that have brushed the fringes of public awareness over the years. In this case its recognition is mainly owed to being used – once! – in “Futurama”, in the 2002 episode “Leela’s Homeworld” to be exact.

Baby Love Child is the one song on this ICA which also appears on Made In USA, but instead of the English language version on that collection (or the misconceived remix released as a single ahead of it) I’ve opted for the original Japanese version, which also has small differences in the arrangement – though that need not concern you unless you intend to get as trainspottery as me! For a bit of colour, I’ve also thrown in the short interlude that preceded it on “This Year’s Girl”.

The Night Is Still Young (Readymade MFSB Mix) (from A Television’s Workshop EP, 1994)

While 1991’s turning-point LP This Year’s Girl fell squarely into the realm of “alternative dance”, its immediate follow-up Sweet Pizzicato Five was a proper no-holding-back club-oriented dance album, and while they never went quite so full-on again, there were enough such numbers down the years to maintain their appeal to clubbers as well as the retro crowd. This song in particular is a key track which they revisited several times over the years, beginning with a 1993 single.

The original was more of a house track, but if P5 had to choose a definitive version, I suspect they’d go for this disco-type arrangement which they originally cut for a children’s TV show. The chorus hook, which is also the Japanese title, translates as “7pm in Tokyo”. “The Night Is Still Young” is a perfectly good title as well, but I don’t know why they changed it. Also of note: the first appearance on this ICA of P5’s band catchphrase, “a new stereophonic sound spectacular!”. You’ll be hearing that again…

P5 never really sounded at home in the “rock” idiom, though I enjoy their occasional visits. This particular song starts off deceptively quiet, starts to live up to its title (CAPITAL LETTERS AND AN EXCLAMATION MARK!), then swings around into a chorus straight out of the flower power era. Strange but charmingly so.

By way of contrast, just a simple pop song pepped up with a horn section. This is the single edit but you’re not missing anything from the album version, which just carries on the “repeat to fade” for another 30 seconds (too long really) before crashing awkwardly into the track after it.

Working on the principle of “What would Saint Etienne do (if they were Japanese)?”, this is your Stoned To Say The Least / Cool Kids Of Death-style overly long instrumental. Actually, the 11:27 full length version of this is not entirely instrumental, but it does take seven and a half minutes before Maki bursts into song. As you might expect, the radio edit majored on those final four minutes, which is fair enough and exactly what we’d all do in the circumstances. Then along came the next album, Pizzicato Five TM, with “Darlin Of Discotheque” on it as a seven-and-a-half minute instrumental. Also fair enough, but the catch is that it wasn’t an instrumental edit of the single but a completely different version, and in my opinion an inferior one. Hence this custom instrumental edit, not available in the shops!

Happy Sad (bilingual version from the US compilation The Sound Of Music, 1995 – original version appears on Overdose, 1994)

The feelgood 60s pop-soul vibe is strong on this track, which I always thought was a minor British hit, but apparently wasn’t. In fact, not only was it not a hit, but Discogs doesn’t list it as having been released as a single in the UK at all. I hadn’t realised that both of the formats I have it on are US imports. It was issued as a single there to tie in with its appearance in the fashion documentary film “Unzipped”, and there were actually two different videos: the original Japanese one, with Maki and session guitarist Gemi Taylor larking about in disco gear, which suits the track perfectly; and the US one, with moody black-and-white clips of Naomi Campbell, Linda Evangelista et al., which… didn’t, so much. The former can be found on YouTube; the latter seems to have disappeared, but it’s no great loss. Anyhow, this is still one of my favourite Pizzicato Five songs and on this mix you get the benefit of verses in both English and Japanese.

A Serge Gainsbourg song covered with a nod to Kraftwerk (there’s either a quotation or an outright sample from “Pocket Calculator” in there), with guest producer Towa Tei (then recently departed from Deee-Lite) bringing the bleeps and bloops.

Up for a bit of pretend orchestra-conducting? Go on, nobody’s watching (yet). A suitably big finish.

Finish? Well, we’ve got two sides of about 21 minutes each, so that’s a vinyl album right there, and strictly speaking “This Year’s Girl #5” and “Baby Love Child” are separate songs, so technically I’ve already given you ten tracks. But I don’t want you to feel cheated, so…

Let’s imagine we’ve gathered up the Pizzicato Five catalogue and taken it back in time to, say, 1986. What shall we give those early adopters who’ve shelled out extra for a shiny unbreakable compact disc? Something smooth, something lush, something, shall we say, “romantique”? Something suitable for playing late at night in a modernist apartment with parquet flooring, a settee in the middle of the room and a picture window looking out over the city lights. I think this should hit the spot! Glass of wine, anyone?

JC adds………….It’s contributions like this that make me incredibly proud of this little corner of the internet and everyone who is part of it.  I had no idea of the existence of Pizzicato Five until the email with the words and tunes dropped into the inbox.  Having read the piece and immediaely appreciating that love, attention and care that’s gone into the text and the incredible artwork which Alex pulled together, I couldn’t wait to listen…..and when I did, I loved it. I hope you all feel the same.