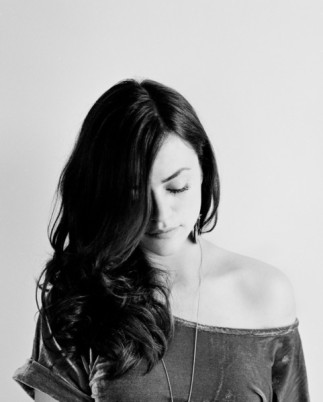 An edited short bio from the artist’s own website (https://www.siobhan-wilson.com/)

Singer, multi-instrumentalist, composer, songwriter, library music producer, Siobhan Wilson was born in Elgin, Scotland, UK. She is a trained cellist from St Mary’s Music School of Edinburgh and pianist, guitarist, and composer. Her 2017 album ‘There Are No Saints’ was shortlisted for the Scottish Album of the Year.  In subsequent years, she toured the UK, USA and Canada supporting the likes of Suzanne Vega and The Proclaimers and as well as her own sold out headline tour.

The Departure (LP) and Plastic Grave (EP) were released in 2019 on her own D.I.Y record label Suffering Fools Records, which is also the home of her newest album, Survivre, released in November 2021.

As I said, on the previous occasion I mentioned Siobhan Wilson, when I posted a review of a Song, By Toad showcase gig in 2017, the word haunting was invented to provide a one-word description of her act, with her voice and gentle guitar playing totally captivated the audience. She is real talent. 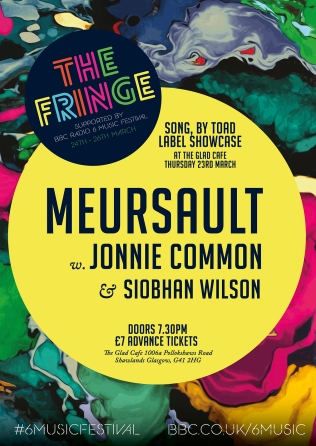 BBC Radio 6 came to Glasgow last weekend with some incredibly high-powered and diverse line-ups at some of the best known venues in the city, with the biggest attention grabber being Depeche Mode at the Barrowlands, a venue they could have comfortably sold-out at least five times over. There was always going to be a huge scramble for tickets for all of the gigs;  they also went on sale on a day and at a time when work commitments prevented me going on-line and so I resigned myself to missing out. There was also the fact that the festival was ahappening on a weekend when I was more or less fully committed to going to a range of other things including football on the Saturday and marking Mother’s Day on the Sunday.

But then something unexpected happened. It was announced that there would be a Fringe aspect with smaller gigs at more intimate venues planned for the lead-in to the weekend, one of which was at Glad Café just a 20 minute brisk walk from Villain Towers, and whose line-up was to consist of three acts from the Edinburgh-based Song, By Toad label. Readers of old will know that I’ve long been an admirer of everything label owner Matthew Young has achieved over the past decade or so, a period in which he has graduated from mere blogging and podcasting into becoming one of the most important and influential figures within the local music scene, so apart from anything else it was likely going to afford an opportunity to have a long-overdue catch up with him if he came along on the night (which he did and we did!). The real bonus however, was the revelation that the gig would act as the Glasgow launch of the new LP from Meursault and that two of the most beguiling acts on the label would provide support on the night. And all for the bargain price of £7.

The night opened with a 40-minute set from Siobhan Wilson. The word haunting was invented to provide a one-word description of her act. A slightly built singer-songwriter who has been recording and performing for about seven years or so, her voice and gentle guitar playing totally captivated the audience.

My companion for the evening – Mike G (possibly the shyest man on Planet Earth) – whispered to me as applause rang out at the end of another stunningly delivered song that her dilevery and vocal range reminded him a lot of Harriet Wheeler. Me? I was thinking of Hope Sandeval during some of the quieter moments and I’m sure others in the audience who were listening intently to every perfectly delivered note were making comparisons with their own favourites and believing that, in a fair and just world, it can only be a matter of time before Siobhan’s talents come to the attention of a much wider public. It was the perfect start to the evening.

Jonnie Common was next to take to the stage. Another who has been around for the best part of a decade, he has released a number of EPs and albums under various guises constantly confounding anyone who likes to put their performers into neatly categorised boxes. He’s been mainstream enough to be invited to perform a Radio 6 session for Tom Robinson but I can’t think of anyone else who has released a critically acclaimed album made solely of sounds from his kitchen utensils as he did just last year. Let’s just say, when Jonnie is on the bill, expect the unexpected.

Tonight he was paying guitar – a shit guitar  that had been designed by Kurt Cobain (his words, not mine!!) that would require a lot of tuning in-between songs. He was joined on stage by Gavin Thomson on keyboards and flugelhorn.

The set turned out to be of songs that are at the development stage, but unlike many other performances of that nature where the audience lose interest from a lack of familiarity with the material, such is Jonnie’s natural stage presence, wit, sense of fun and ability to do something you weren’t the slightest bit prepared for, everyone remained beguiled by what was unfolding in front of them.  It was a first for me that someone could use electronic wizardry to make the tuning of a guitar sound like an orchestra playing and who, in the middle of a song in which he had forgotten the words, pressed a button to blast out a, sadly, unused and hilarious jingle specially recorded for a Radio 6 DJ. Oh and who was able, again thanks to some very sharp sampling, to bring us the delights of Lauren Laverne on backing vocals. It was the perfect continuation of the evening.

(The Siobhan and Jonnie songs were taken from this 2014 release)

Finally, it was the turn of Meursault to take to the stage. And in the week when this blog is paying homage to the late and great Billy MacKenzie, it somehow seems apt that to put the spotlight on frontman Neil Pennycook, without any question the finest vocalist to come out of Scotland since the turn of the century.

Readers of old will know that Meursault have long been personal favourites. Beginning life as Neil’s solo project, they soon expanded into a highly talented and accomplished group of musicians, some of whom were part of the ensemble for shorter periods than others, and between 2008 and 2014 they released three very different sounding albums of original material, a handful of excellent singles/EPs and one crowd-funded album of suggested covers encompassing a range of styles such as electronica, pop, folk and krautrock. In August 2014 they seemingly called it a day with Neil announcing that he would now write , record and perform under the name of Supermoon. The other band members sought to pursue solo careers or within new bands, most notably Modern Studies whose chamber-pop debut album last year received many plaudits.

Out of the blue, Neil announced the return of Meursault with a plan of recording the Supermoon material as a band. An EP, Simple Is Good was released in October 2016 and an album I Will Kill Again in February 2017. In my own perverse way, I didn’t rush out and buy the new material for the simple reason that I’ve always found any live exposure to the power and beauty of Neil’s voice as the best way to be introduced to his songs. So, for the most part as this was a set almost exclusively drawn from the new releases, these were songs with which I wasn’t familiar.

The five-piece band took to the stage – there were some familiar faces with Sam Mallalieu on drums and Reuben Taylor on accordion/piano, but there was a new member in the shape of Robyn Dawson on fiddle and backing vocals while the spectacularly bearded Bart Owl of Eagleowl was on bass (it transpired he was filling in for Fraser Hughes who was unavailable on the evening). Over the course of the next hour or so this wonderfully talented group delivered something that I wasn’t the least bit expecting. It was for the most part a far harder edged sound than I had ever experienced at previous Meursault performances with Neil demonstrating what had been previously been, to this fan, largely hidden extraordinary talents as a lead guitarist making full use of his pedals but all the time perfectly complementing that extraordinary voice of his. As I watched this unfold, certain words from a Beastie Boys song were racing round my brain – mesmerising, tantalising, captivating and devastating. It was the real deal.

And then……..Neil asked for all the sound monitors to be switched off. He picked up a bottle of wine, poured a glass and went over to stand beside Reuben who was seated at the piano (the tiny stage at Glad Café meant in had to be located adjacent). He launched into a cover version of Day Drinker, a song written and recorded by Adam Faucett, an Arkansas-based musician, and in doing so provided a spellbinding performance that caused a few tear ducts to open.

It was, as my Canadian friends would say, awesome. A show-stopping moment that had this mere mortal again trying to work out what special part of the DNA enables talented performers, be they singers, actors or dancers, who, having just left nothing out there during a particular part of a show, let the applause die down and get geared up for what is due next.

All too soon the clock had ticked round to curfew time and Meursault took their leave of the stage. I was quickly over to the merchandise stall where I bought the two bits of music that I had previously held off from. They will be on regular rotation in the coming weeks and months.

I’m not sure how the rest of the BBC Radio 6 show went over the course of the weekend – I would imagine that folk who got to see their favourites in smaller than normal venues or perhaps as the support act to a bigger name, will have come away raving about it. But pound for pound, I can’t imagine they got as great a bargain as those of us at Glad Café, nor did they experience such a varied bill of fare that saw three equally superb acts deliver in their own and very distinctive ways.