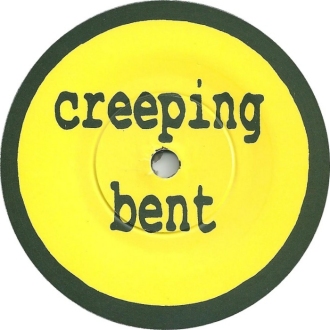 Creeping Bent, aka The Creeping Bent Organisation is an independent record label set up by avant provocateur Douglas MacIntyre in 1994, based in Glasgow, Scotland. Creeping Bent was officially launched with a maxi–media event at Glasgow’s Tramway Theatre on 12 December 1994. The event was called A Leap Into The Void (BENT 001), in homage to Yves Klein, and featured film / theatre / pop ….made – up by a variety of artists.

Over the years Creeping Bent has focused on audio & visual stimulation, releasing music by an eclectic array of artists operating across multiple genres. Here is an example of some of the artists who have worked with Creeping Bent over the years; The Nectarine No9, Appendix Out, Found, The Secret Goldfish, Bill Wells & Isobel Campbell, Alan Vega / RCTJ, Adventures in Stereo, Bricolage, Future Pilot AKA, The Sexual Objects, Monica Queen, Fire Engines … There have been several highlights along the way, perhaps the most prestigious was being chosen by John Peel as the featured label when he curated the Meltdown Festival at the Royal Festival Hall… perhaps having Creeping Bent artists record 20 sessions for Peel’s BBC Radio 1 show comes a close second.

I’ve mentioned Douglas MacIntyre a few times previously at this little corner of the internet, sometimes as the pop label boss but more often as a playing musician in all sorts of capacities and guises.  What I didn’t know until a newspaper feature a few years ago that had nothing at all to do with music, was that his wife is none other than Katy McCullars (aka Katy Lironi) who was part of the semi-legendary Fizzbombs in the C86 era, as featured here back in June 2015.

Katy would later be part of The Secret Goldfish, a band that released a number of intriguing and occasionally brilliant records in the 90s.  Fast forward to 2011, and she is the lead singer with Fake Eyelashes who released what I think was a download only album entitled A Little Bit Of Bread And No Cheers, via Creeping Bent.  There’s a wonderfully worded review to be found on-line from the archives of The List, a Scottish magazine that features all aspects of the performing and visual arts:-

Katy Lironi’s pedigree as a chanteuse dates back to C-86 swoonsters Fizzbombs followed by a stint fronting bubblegum stompers The Secret Goldfish. This latest vehicle for Ms L’s sublime cooing is an infinitely more laidback affair. Think Saint Etienne-style ballads without London-centric reference points but with a melancholy worthy of bedsit-era Tracy Thorn. This solitary, gal-in-exile feel is fleshed out on a still lugubrious ‘If You Made It Easy For Me by a mellowed out band arrangement, while electronic skitters underscore the equally plaintive ‘If I Could Only Cry’ on a late-night affair that sounds in need of a cuddle.I’ve one of the songs on the laptop – courtesy again of Phil Hogarth who I mentioned in the posting in this series last week. It’s one mentioned in the above review.  And it’s rather wonderful to listen to, although the vocal is a bit on the fragile side:-
mp3 : Fake Eyelashes – If You Made It Easy On MeSublime, and reminiscent musically of The Independent Group back in the 90s,