It was back in June 2017 when I previously gave a mention to Girls At Our Best!, recalling that I learned of them thanks to Getting Nowhere Fast, being covered by The Wedding Present.

As I mentioned in passing, Getting Nowhere Fast was a self-financed single, released in April 1980 on the band’s own Record Records following which Rough Trade put out a second single entitled Politics in November 1980.

I’ve now tracked down a copy of the sophomore effort:-

My info, supplied by my big reference book of indie music, was that this came out solely on Rough Trade but it turns out with was a joint release with the band’s own label.

At first listen, I didn’t think it came close to matching the majesty of the debut 45, but it’s proven to be one of those songs that manages to grow with successive listens.  I thought it was a song that could firmly be put in the big bundle of twee songs, but in fact there’s a fair bit of an anti-establishment punch being thrown at the antics of those who are out on the stump canvassing votes, with the sinister line of ‘Love to see you smiling when you’re kissing little girls’ delivered with seeming innocence.  And if you’re wondering what is being chanted in the background while the chorus rings out, I’m happy to clarify that name checks are given to the USA, CIA, KGB, EEC, FBI, and ICI. 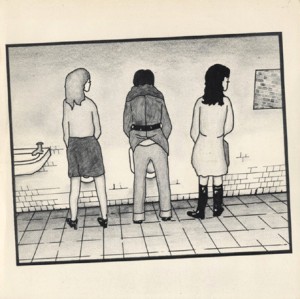 I’ve said before that I didn’t really latch on properly to The Wedding Present until I heard Kennedy being played ay high volume in a record shop. But after that, it was enjoyable going back and listening to the earlier material.

I really liked the song Getting Nowhere Fast, one of their previous b-sides on a 12″ single and included on the CD of George Best, and was intrigued when I spotted, from the fact that it wasn’t a David Gedge composition, that it was a cover version. But the names ‘Alan, Evans, Swift, Oldroyd’ meant nothing to me and in the pre-internet days couldn’t readily be looked up.

It was to be some time before I learned that the original had been by a Leeds band called Girls At Our Best, released in 1980. Even when furnished with that information, I was still none the wiser. Eventually I got to hear the original, via someone putting it on a cassette for me, and fell for its charms. By this time however, it was impossible to track down a copy and it would take until the digital age before I got a decent version without any lo-fi hissing.

Girls At Our Best were Judy Evans (vocals), Jez Alan (guitar), Terry Swift (bass) and Chris Oldroyd (drums) and who formed in 1979 out of two other Leeds bands, S.O.S and The Butterflies.

Getting Nowhere Fast was their debut effort, self-financed and released in April 1980 on their own label Record Records following which Rough Trade put out a second single entitled Politics in November 1980. The drummer then left the band just as they signed to Happy Birthday Records for whom there were two singles and an album, Pleasure, in 1981. The band had enough of a following for the album to reach #60 in the charts but I just can’t recall it or them at all.

According to my big book of indie songs, there was a further single in May 1982 entitled Heaven and released on God Records but there’s no listing on Discogs which means it must be very rare indeed. The band split not long after but with interest in them again on the back of the TWP cover, Strange Fruit in May 1987 would release a Peel Sessions EP that had been broadcast in February 1981.

Here’s the two sides of the debut single:-

And here’s the cover, originally on the b-side of the 12″ of Anyone Can Make A Mistake:-