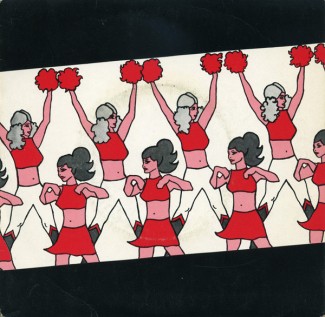 It was back in June 2017 when I previously gave a mention to Girls At Our Best!, recalling that I learned of them thanks to Getting Nowhere Fast, being covered by The Wedding Present.

As I mentioned in passing, Getting Nowhere Fast was a self-financed single, released in April 1980 on the band’s own Record Records following which Rough Trade put out a second single entitled Politics in November 1980.

I’ve now tracked down a copy of the sophomore effort:-

My info, supplied by my big reference book of indie music, was that this came out solely on Rough Trade but it turns out with was a joint release with the band’s own label.

At first listen, I didn’t think it came close to matching the majesty of the debut 45, but it’s proven to be one of those songs that manages to grow with successive listens.  I thought it was a song that could firmly be put in the big bundle of twee songs, but in fact there’s a fair bit of an anti-establishment punch being thrown at the antics of those who are out on the stump canvassing votes, with the sinister line of ‘Love to see you smiling when you’re kissing little girls’ delivered with seeming innocence.  And if you’re wondering what is being chanted in the background while the chorus rings out, I’m happy to clarify that name checks are given to the USA, CIA, KGB, EEC, FBI, and ICI.

4 thoughts on “HERE’S THE SOPHOMORE SINGLE”