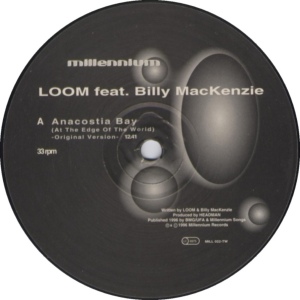 In 1992 Billy’s “Outernational” solo outing hit the shelves. marred by delays and record company troubles it slid out almost un-noticed, received little attention and neither of its singles troubled the charts. Circa Records folded shortly after its release and Billy’s career seemed stalled again.

So it was that in late 1992, ten years after they had last worked together, Billy’s old Associate Alan Rankine phoned Billy up and the pair began recording again in Auchterhouse. Half a dozen songs from those reunion demos eventually surfaced on the “Double Hipness” CD in 2000. One of those songs was called “Edge Of The World” (it is well worth buying the CD for that and the other 29 tracks!). However in 1992/93 Billy wasn’t keen to tour or perform live – so that Billy/ Alan reunion simply never got off the ground. Those recordings were shelved until after Billy’s death..

However, Billy knew a good song when he wrote one. In 1996 the song was still unreleased in any official form. That summer Billy was back down living in London and heard an instrumental track by Loom. Loom’s members Bent Recknagel and Ralph P. Ruppert (AKA Headman) were London-based and ran the Millenium label.  Billy, having heard their instrumental track on a cassette, had sang “Edge Of The World” over it, his melody and lyrics locked in perfectly.  MacKenzie contacted them, visited their studio on the Portobello Road in London and the track was finished in half an hour.  The result was quickly released as “Anacostia Bay (At The Edge Of The World)”.

It is a blistering raw vocal performance, emotive and right up there with any of Billy’s best vocals, with burbling synths, sequencers and percussion propelling it along. In its original form it is a 12 minute 42 second version and was released on 12″ and CDEP back in August 1996.

This was the last record with Billy’s name on it which was actually released in his lifetime (as far as I am aware).

To add to the confusion a mis-spelled “Steve Neugal” is credited with Additional Keyboards and Programming on the Berlioz Mix of the Loom track!

An edited version of this Loom version of the song was later released on the posthumous “Auchtermatic” CD.   But this is the entire, full-length, spectacular original – unavailable for nearly 19 years….