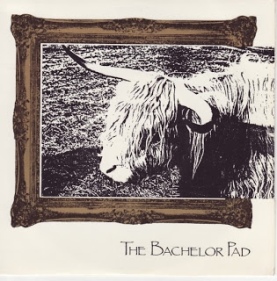 I pride myself on having at least an awareness of just about every singer or band who has been involved in indie music over the past 35 years or so and so I was astonished when I did a bit of research into today’s CD86 combo to learn that they were from Glasgow.

The Bachelor Pad were a completely new name to me.  Turns out they were a five piece consisting of Tommy Cherry (vocals/ guitar), Martin Cotter (guitar/vocals), Dave Harris (keyboards), Willie Bain (bass) and Graham Adam (drums).

Their first recording came in early 1987 via one side of a free flexidisc given away with a fanzine before three singles in a twelve month period for Warhola Records.  It would be a further two years before the release of a debut LP on Imaginary Records and then finally three singles on Egg Records before they called it a day in 1991.

One critic has described them as fusing quickfire retro-punk, retro-Pysche and retro-Swinging Sixties, all of which make it difficult to accurately describe what they sound like.  The song that was included on CD86 is, to my ears, more miss than hit and is thankfully over in a little more than two minutes:-

It was actually the b-side of a single released in July 1987 and I have managed to track it down for you – it’s been described as a cross between Syd Barrett and Buzzcocks.  I’m not all that enamoured by it.

mp3 : The Bachelor Pad – The Albums Of Jack