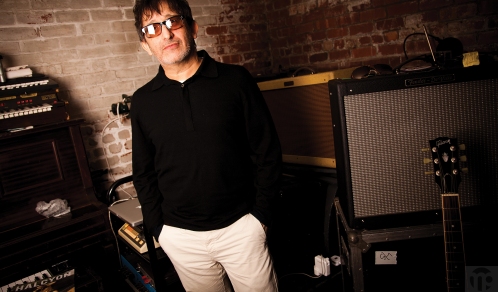 My initial thought when contemplating an ICA featuring Ian Broudie was to come up with something on which he was only involved on the production side and not as a performer. But given that he’s done so around 50 albums and numerous singles over the years, I decided that would be a task for when I had a bit more spare time. I’ve gone for the more straightforward task of a 10-track LP, consisting of his output as Lightning Seeds with a bonus EP thrown in featuring his other bands. I make no apologies for the poppy and hits-laden nature of this ICA as the man has given us some memorable tunes over the years.

After the best part of a decade of being in the shadows, either as a producer going by the name of Kingbird or as guitarist in a band under his own name, Ian Broudie gained a higher profile after his debut single crashed into the UK Top 20 in the summer of 1989; what I hadn’t realised until looking it up is that Pure also went Top 40 on the Billboard Chart in America.

It’s a wonderful love song, set to the happiest and upbeat of pop tunes on which just one man performs. I recall seeing the promo video for this and being blown away with the realisation that Kingbird actually had a voice that perfectly matched the music he had been so involved with previously. Kind of like Dave Grohl years later coming out from behind the Nirvana drum kit and leading the Foo Fighters to rock stardom….totally unexpected but so natural.

Jollification was the third and ultimately most successful Lightning Seeds studio album, hitting #12 in the UK and spawning four hit singles, the second of which was Change. As with just about everything that band has ever released, the key to its ability to get into your head and stay there is in the production with guitars, keyboard and percussion blending perfectly. It is an album packed with pop gems with this particular track demonstrating that you don’t need a big hooky, sing-a-long chorus to be a hit. It actually provided the band with their best ever chart performance with an original song or outside the Three Lions collaborations with Skinner and Baddiel.

Lightning Seeds weren’t afraid to offer up cover versions, often as b-sides to singles. Sometimes these covers weren’t very good, but on other occasions they were very innovative and entertaining. The fourth and final single from the Dizzy Heights LP was originally conceived as such a b-side featuring a song composed by Jim McGuinn and Gene Clark of The Byrds that was later a hit for The Turtles in 1968. But having worked some studio magic with loops and samplers, and giving it something akin to a trip-hop treatment, it was decided to include it instead on the album where it was particularly singled out for praise among reviewers.

Most of the time, any fourth single to be lifted from an album sinks without much trace, often just sweeping up all the spare b-sides/live recordings that are lying around, but I this instance it gave the band a Top 10 hit. And deservedly so.

This was featured on the blog just a few weeks ago, the 12” single having a strange and unusual sleeve and three top-notch b-sides. As I said at the time, both it, and its predecessor single deserved much better chart performance than they experienced; they certainly have aged better than many of the other singles by other bands from that era but looking back, they suffered from being released at a time when grunge and rock were very much in fashion and pop had been elbowed unceremoniously to the side.

The fifth LP is one that is worth looking back at with the benefit of hindsight. Ian Broudie was now a household name thanks to the success of the Three Lions single that had celebrated England hosting Euro 96 when football ‘came home’ and again in a re-recorded version to celebrate the 1998 World Cup. A ‘Best Of…’ album had gone multi-platinum and the band was also enjoying positive reviews of the live shows. But the frontman wasn’t happy – success didn’t sit well with him and it would later be revealed that his personal life was unravelling somewhat.

The new album, Tilt, was a departure from the norm and was more geared towards electronica and dance music while the lyrics were less generically upbeat than previous. There was an element of self-loathing about them and there was an overtly political effort bemoaning the treatment of sacked dockers in his home city of Liverpool. The reviews were mixed, with some comparing the record to the likes of New Order and Pet Shop Boys but others expressing disappointment in comparison to previous records. The end result was the band didn’t do much in the way of high-profile promotion which meant this more than decent single has been sort of lost in the midst’s of time. Not long after the release of Tilt, Ian Broudie called time on his recording career.

‘The Life of Riley’ is a phrase that dates back to the early years of the 20th century, becoming popular in songs and literature to represent someone who was living a happy, contended, stress-free existence without having to work hard for such an outcome. Ian Broudie, at the tail end of the same century, took the phrase and turned into a song that didn’t stray too far from the original sentiments but was cleverly worded as a tribute to his new-born son who had been christened Riley.

Twenty five years on, and Riley Broudie is part of Lightning Seeds, appearing on stage alongside his dad. It must be a strange feeling to perform a song written specifically for him.

It’s a tremendous pop record that, as I mentioned in passing when featuring Sense on Side 1 of this ICA, deserved to be a much bigger hit than it was. The dream-like remixed version that was put on the 12” b-side of Sense is also well worth your time.

Ian Broudie had enjoyed working with Terry Hall over an extended period of time, going back to producing The Colourfield as far back as 1984. In the early 90s, they co-wrote a number of songs for the Sense LP, including the title track, that was purloined for Home, the first solo album Terry Hall released under his own name in 1994. An album that was produced by…..yup…..Ian Broudie and which featured songs co-written with the likes of Craig Gannon, Andy Partridge, Nick Heyward and Damon Albarn.

And while they were in the studio making this solo LP, Broudie and Hall found time to compose this classic Lightning Seeds single, the one that would be the first lifted from Jollification that took the band back into the Top 20 for the first time since the debut single.

Joy and All I Want, the two follow-up singles to Pure flopped badly and so it did initially seem as if Lightning Seeds would be one-hit wonders.  I don’t think there would have been a three-year delay till the next chart success if this tuneful and catchy number had been picked out as a 45.

There’s a lot of clichés in the lyrics to this single but thanks, again, to an excellent production that drives it along at an incessant and enjoyable beat, is a song to be enjoyed and not endured. A good solid, somewhat atypical Lightning Seeds 45 that doesn’t get aired these days as some of the others but I for one always appreciate any surprise appearance on i-pod shuffle.

As mentioned in the blurb on Side 1, Lightning Seeds broke up in 1999 after the release of Tilt. The next Ian Broudie LP release turned out to be a solo effort, Tales Told (2004) and it surprised quite a few thanks to it being a stripped-back, almost folk-like effort quite unlike anything he’d done before.

Five years on and Lightning Seeds were reincarnated and a sixth album, Four Winds, was released. It turned out to be more akin to the solo effort than the 90s output and wasn’t all that well received. The few press interviews given at the time indicated that it was a tough record to make as Ian had dealt with some tragic family circumstances in the first decade of the new century that had led to him re-evaluating a lot of things.

Again, using hindsight, Four Winds was an album that was packaged wrong and should really have been a solo release. Attaching the badge of Lightning Seeds led listeners to expect the upbeat happy stuff that the band had been so adept at churning out at the height of their fame. It’s full of songs that are quite forlorn and that lyrically seem quite bitter about what life has become, but then, out of the blue, the LP closes with I Still Feel The Same, a song that recalls the joyous aspects of being a singer and performer and while there are pangs of regret that perhaps he didn’t change the world, there’s a quiet satisfaction about what has been achieved in a lifetime of work .

There hasn’t been a studio album since, but given that Lightning Seeds are now part of what is a very well-established and lucrative nostalgia circuit, and indeed they co-headlined a festival not too far from Edinburgh a few weeks ago, so it would seem that Ian Broudie, having coming to terms with his pop legacy and revelling in the fact he is still giving pleasure to so many all these years later. It’s not too shabby an outcome is it?

1. Big In Japan – Suicide A Go Go
2. Original Mirrors – Boys Cry
3. Bette Bright and The Illuminations – Hello, I Am Your Heart
4. Care – Whatever Possessed You

Tempting as it was to just feature Care on the bonus EP, here’s some pre-Lightning Seeds stuff that acts as a reminder of the diversity of the bands that Ian Broudie was part of.