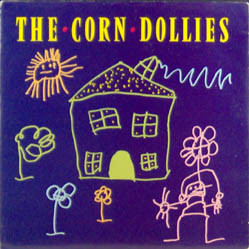 The idea of this particular series is to pick out bands that were part of the C87 triple-CD set issued by Cherry Red Records last year, with the proviso that they had to be making their debut on this blog.

It’s a bit of a cheat this week as it’s turn of The Corn Dollies who were previously part of this post back in January 2014, but as it was a cover version I’m prepared to be flexible to enable a first appearance with one of their own tunes.

Here’s what the info booklet says:-

THE CORN DOLLIES came out of the traps with their Byrds-styled, Robert Forster-produced debut single, ‘Forever Steven’, released on their own Farm label before being snapped up and re-released by Medium Cool after the Manchester label unleashed their second single ‘Be Small Again’. With their chiming guitar sound overlaid with strong harmonies, The Corn Dollies followed with ‘Shake’ which revealed a debt to Lloyd Cole, but toughened up for the more robust sound of singles ‘Map Of The World’ and ‘Nothing Of You’. The band’s debut album ‘Wrecked’ appeared on Midnight Music in 1989, in the wake of an eponymous compilation circulated to capitalise on the band’s popularity in France and Spain. After the baggy-influenced ‘Joyrider!’, the band split in 1990.

The band were a five-piece from London, consisting of Steve Musham (vocals and guitar), Tim Sales (guitar), Steve Ridder (bass), Jack Hoser (drums), and Jono Podmore (violin). They provided support to a solo tour undertaken by Ian McCulloch in 1990, so some of you may actually have caught them live on occasion.

I’ve also fished out the second 45 referred to in the booklet, and it too pays more than a nod to the sound of the Commotions.  It’s enjoyable enough but not a patch on the splendid debut.

One thought on “BONUS POST : FROM THIRTY YEARS AGO (5)”