There are two ways to get to Villain Towers from Glasgow city centre.  The best and quickest way is to take a train from Central Station, with it being just one stop and five minutes to Dumbreck, itself a couple of hundred yards away from the tower’s turrets.

The alternative is to take a 59 bus, which nowadays is a pale imitation of its glory days some twenty-five years ago when it used to meander from the south side through the centre, over to the west end via Glasgow University every twenty minutes or so.  Now, it’s merely an hourly service, from the city centre to the south side only.

The bus makes it way through Pollokshields, an area of the city celebrated in song by the 1990s on the debut album Cookies, released on Rough Trade in 2007:-

Two years later, the follow-up album, Kicks, also contained a track harking back to the part of the city where the members of the band grew up:-

Yup….a tune in which taking a journey on the bus (presumably into the city centre) is made all the better by the appearance of an attractive member of the opposite sex.

1990s called it a day in 2012, probably not too long after I caught them as an excellent opening act for Cornershop at a gig in one of the outlying housing schemed of Glasgow as part of the annual Celtic Connections festival that takes place every January.

However, the band got back together again not too long ago and their third album, Nude Restaurant, will be coming out later this year on Last Night From Glasgow, the wonderfully inventive label that I’ve mentioned a few times before. Click here for more details.

Oh, and the reason for all this today instead of the usual Saturday feature?

Your humble scribe is 59 today.  I might celebrate it with a bus journey. 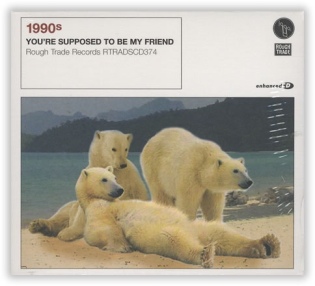 Of all the bands to feature in this series 1990s are by far and away the most local to Villain Towers. Their debut LP featured a song about the area they are from and where I live:-

While the sophomore album paid tribute to our local bus service:-

1990s emerged at a time when Rough Trade Records were enjoying something of a renaissance with indie-guitar bands being briefly back in fashion and acts such as The Strokes and The Libertines generating good sales and enabling punts to be taken on up and coming acts.

Two of the band – lead singer Jackie (aka John) McKeown and bassist, Jamie McMorrow, had a bit of a pedigree as founding members of the cult act The Yummy Fur a band which was also responsible for the early careers of Alex Kapranos and Paul Thomson from Franz Ferdinand who really were the media darlings of the day.

The band worked tirelessly to make it big in the industry. If they weren’t gigging as headliners in in small venues across the country then you’d find then as opening acts for all sorts of similar acts such as Babyshambles and the afore-mentioned Franz Ferdinand.

Despite being a cut above most bands of their ilk, 1990s never quite made it. Their legacy is just four singles and two LPs under their own moniker although they were also one side of a very rare and hard to find 45 in which they and The Royal We recorded cover versions of Postcard singles.

I last saw them just over three years ago opening for Cornershop in Glasgow and given that there were a few unreleased songs aired that night I had hoped there might be further releases in the offing but sadly, no. I can only assume the band are no more.

This was their second single for Rough Trade back in October 2006. It reached #86 in the singles charts which was about as close as they ever got to mainstream success:-

Don’t worry…..the b-side is an original composition and not a take on the traditional Christmas number.