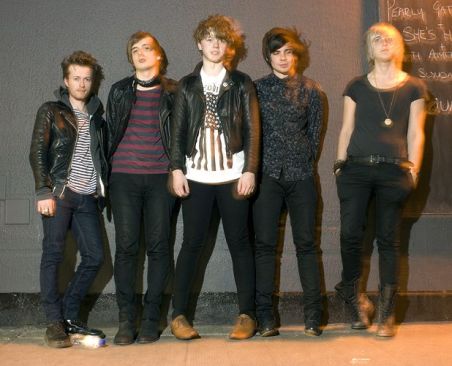 I’ve actually found, from the vaults of the old blog, my first recollection. It’s fair to say I was excited.

At lunchtime yesterday, an e-mail arrived letting me know that Sons & Daughters were playing a ‘secret’ gig at the tiny venue of the Captain’s Rest in Glasgow. There were no advance tickets on sale..simply turn up at the door and pay your £7 on a first-come-first admitted basis until the venue reached it capacity of 110……

Suffice to say, it was a truly memorable gig, and I will do a full review early next week.

But I just wanted to do an extra Saturday posting to rave about SHe’S HiT, one of the support bands that played last night. Dear Readers, this is the first time in a very long while that a band I’ve never heard of have blown me away at first time of hearing….

This gang made a truly amazing noise. I cant say that they’re truly original – after 30+ years of going to gigs I don’t think I’ll ever discover anything completely new – but by christ this lot are fantastic at what they do.

SHe’S HiT hail from Glasgow and consist of Div Wilson, Cammy Wilson, Mike Hanson, and Philip McLellan, four extremely young lads from Glasgow. But they took to the stage as a five-piece last night…..with Scott Paterson from the headline act now seemingly part of the band…..although he did spend most of the show over in the darkest corner of the stage away from whatever lights there were.

Wearing black jeans and stripey t-shirts beneath black leather jackets, the immediate visual image is that of a re-born Jesus And Mary Chain. And when the opening notes of their first song blast out, it almost feels as if they are no more than a tribute band…..

But it’s a feeling that lasts for about 20 seconds as the noise that comes from the stage takes me back even further in time…..was that a blast of The Cramps?? And yes, now I get it….these guys love really early Nick Cave….THAT’S where the band name comes from….of course!! It’s a ‘song’ by The Birthday Party (those who are familiar with their work will understand the use of the ” around the word song.

And it is bloody brilliant.

Over the course of a set that lasted maybe 35-40 mins, they delivered stuff that at times had me thinking of My Bloody Valentine, The Stooges, Sonic Youth, Velvet Underground, The Raveonettes and The Pixies as well as the afore-mentioned JAMC, Bad Seeds and The Cramps.

I really didn’t think bands like this existed any more.

Over the next few months, I picked up two 7″ singles and a CD album, all released on local label Re:peater Records.  I saw them a few more times, including another support slot to Sons and Daughters on what was my first visit to SWG3, a then newly opened venue in the west end of the city, but just as quickly as they burst onto the scene, they seemed to disappear.

As it turns out, the stuff I bought back in 2011 was all that they ever recorded and released.  I did a bit of digging via their old Facebook page and learned that by mid-2013 they were now recording under the new name of Junto Club, and are still going strong under that moniker today.  It’s no real surprise that our paths haven’t crossed, as Junto Club are more on the dance/electronic side of things that I’m far too old to keep an eye on!

Here’s one of the singles…..the track that I recall really blowing me away that night in the Captain’s Rest:-

Looking back, it really is no surprise that they made the move into the club/electronica side of things.  Their sole album, Pleasure, came with a second disc of remixes, all of which were leaning that way rather than being any sort of re-treads of the guitar noises.  It’s now clear that’s where their interests and futures really lay.

Another double single this week….and an absolute belter if you’re not previously familiar with either band:-

It came out in late 2011 on the locally based Re:Peater Records.