I don’t care that this has already featured on the blog a couple of times previously as this is the one solo song I have from my good mate who is now the guitar player with Butcher Boy:- 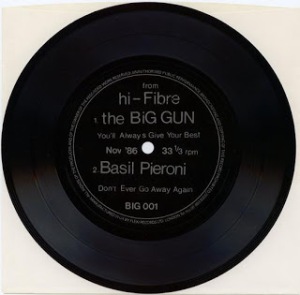 I’ve mentioned before that for a short while from around late 1985 for maybe around 18 months that music took a bit of a back-seat in my life. I had just graduated from university, gotten my first job and moved to Edinburgh to live. I got a bit entrenched for a while in the world of community theatre and even a bit of stand-up comedy…..writing stuff for others not performing.

So there’s a bit of a hole in the collection from around this era. I’m aware of a fair bit of the stuff thanks in the main to Jacques the Kipper and his endless supply of compilation tapes a few years later, many of which featured songs and bands from my ‘lost’ period.

Today’s Scottish singles isn’t one that JtK brought to my attention. It was only in recent years through the blogging activities did I learn that a number of excellent yet short-lived Scottish bands embraced the DIY ethos much of which would contribute to the C86 movement that totally passed me by at the time.

History doesn’t say record much about The Big Gun. They were from Irvine, a town on the west coast of Scotland some 25 miles south-west of Glasgow. They only ever released one single on their own Hi-Fibre label while one other song was made available via a flexi-disc which had, on the other side, a song by another native of Irvine, a singer-songwriter called Basil Pieroni.

As regular TVV readers will know, Basil is nowadays the guitarist in Butcher Boy and someone I’ve become friends with in recent years. It was through this connection that led me to download some tracks from a posting at the wonderful (but now sadly defunct)  Consolation Prizes blog:-

The homemade info that came with the flexidisc has been reproduced above, but in case you can’t read it:-

Hi-Fibre : Fresh, substantial and committed, in this instance, to the provision of free pop. Here, enthusiasts can sample the delights of The Big Gun and Basil Pieroni recorded here for the first time.

Hi – Fibre : Bright, urgent and working through the night to deliver instant classics to the nation; allow no-one to seel you this record. Hi-Fibre – fast, reliable and painfully instinctive

But as I said above, only one proper 45 would appear –  Heard About Love backed with Happens All The Time. Sadly I don’t own a copy. But thanks to the wonders of modern technology, I’m been able to convert copies of the tunes as posted on a video channel:-

Have a listen folks…..and discover one of THE great long-lost 45s of Scottish indie-pop.

Oh and the chap Andy O’Hagen on “additives”??

I’m reliably informed it was the tambourine that he was shaking. He grew up to be this awfully talented bloke……