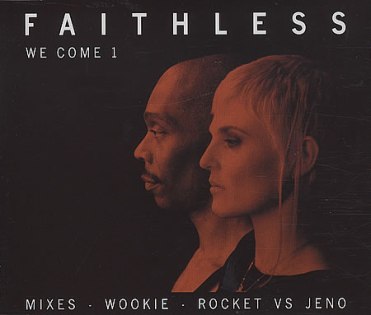 It’s fair to say that 99% of stuff that I’ve bought since my formative teenage years can be described as guitar driven pop, however you define it. It’s very much my forte but every now and again something catches my ear and demands purchase. Such as this, back in 2001:-

An absolutely massive song in so many ways, it reached #3 in the UK singles chart which is the best position Faithless ever achieved. It was accompanied by a cracking video as well:-

Turns out that the CD I picked up is the one labelled CD2 and you can now buy it on Discogs for as little as 40p plus postage. Here’s the two other mixes for those of you who who like that sort of thing:-

ORIGINALLY POSTED BY ctel (aka ACID TED)
ON 9 NOVEMBER 2008 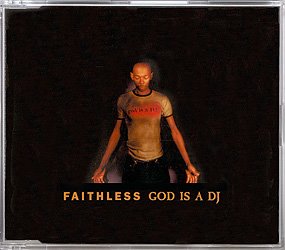 Second in the series where Mrs CTel explains which dance tracks indie kids should go for. Today, handbags at the ready for Faithless.

The three principal members of Faithless are: Maxwell Frazer AKA Maxi Jazz (Conscious Rap) Ayalah Bentovim AKA Sister Bliss (Music) Roland Armstrong AKA Rollo (Producer, Music). Many of the songs are sung by Pauline Taylor.

Jamie Catto was originally part of the group but left after the release of the second album “Sunday 8PM”.

Their first album, 1996’s “Reverence”, was an underground sensation but did not quite break the mainstream. 1998’s “Sunday 8PM” changed all of that, the single “God Is a DJ” became a big club anthem while the album enjoyed bigger sales than anything they had previously released. Critics may have been harsh, but the group kept moving forward with both members also pursuing solo careers on the side.

Faithless are an annoying lot when it comes to amazing tracks that build up frustratingly slowly and then burst into a glorious combination of rhythm and melody. That’s why they’re so fabulous live – they get straight to the good bit and then play expertly around with the sound. Try to access inner peace as the introduction signals great things to come but doesn’t deliver until full hair-tearing minutes later. It is well worth it but do get a version where the full dance part doesn’t disappear moments after its just got into its stride. Otherwise inner dance-floor karma will turn into outer world irritability.