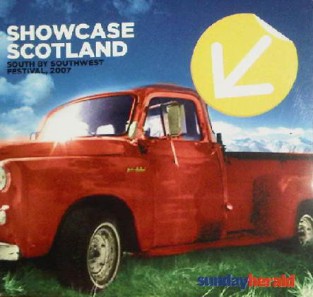 I’ve one song by The Needles on the hard drive, courtesy of its inclusion on a CD given away free with a newspaper back in July 2007 featuring bands who were part of a Scottish Arts Council effort to promote music at the 2007 South by Southwest Festival in Austin, Texas.

The Needles were a four-piece band who formed in their mid-teens in late 1990s Aberdeen, relocating to Glasgow in 2001. Influenced heavily by 1960s garage punk and late 70s new wave/powerpop, their first limited-edition single on newly formed indie label Lithium Records sold out within weeks of its release, and the follow-up “We Got the Soul” continued the momentum, garnering positive notices in the Melody Maker and NME, as well as airplay on Radio 1’s Evening Session.

Various delays and false dawns followed, and although they continued to release records for a good few years afterwards, switching to the better-funded Dangerous Records in 2002, this early momentum was never truly regained, although their last three singles, “Dianne, Summer Girls, and, Girl I Used To Know”, received a degree of exposure on MTV2, Radio 1, and XFM.

The Needles recorded several sessions for the BBC, most notably for the Mark Lamarr show on Radio 2 in 2006, and played their last gig with the original line-up at the South by Southwest music festival in Texas in 2007, before finally calling it a day later that year.

One of the singles made it onto the Sunday Herald CD:-

I probably listened to the track once and then forgot all about it till now.  I gave it another listen recently and was, again, completely underwhelmed.  Rob Webb, in reviewing the album In Search of The Needles, for Drowned in Sound, was quite scathing but on the basis of the above three minutes, it’s hard to disagree:-

This is a “much-anticipated debut” according to the blurb, and with their first EP released over two years ago it’s clearly been a long time in the making. Don’t expect any tortuous, finger bending solos or complex bass lines, though, because these are some of the most straightforward guitar ditties you’ll hear all year, the kind you’d take home and ravage before booking them a taxi without offering breakfast.

You see, The Needles’ sound is a bit like a gang of page-three models: perky, pretty but ultimately lacking in substance. Bits of punk, bits of rock but always with an indie-pop core, In Search Of The Needles is chock-full of tunes you can hum. It’s a pity, then, that the relentless pace of the record means it’s hard to get truly engrossed in the music.

Feel free to express alternative opinions, or otherwise, via the comments section.