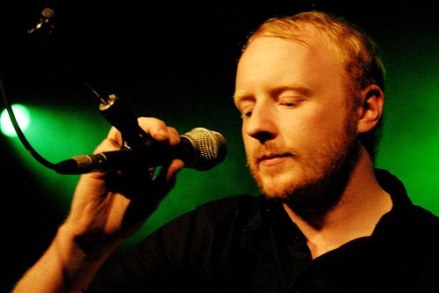 Malcolm Middleton, one half of Arab Strap, will release his latest solo album Bananas later this month. It is actually quite incredible to realise that it will be his tenth solo studio album, dating back to the bizarrely named 5:14 Fluoxytine Seagull Alcohol John Nicotine in 2002 and incorporating Music and Words, his largely spoken-word collaboration with the artist David Shrigley in 2014 and the two efforts in 2012 and 2015 under the moniker of Human Don’t Be Angry.

So there’s plenty of material out there for an ICA, and as ever when someone who is a huge fan tries to condense it down to ten songs, there is much anguish as a personal favourite misses the cut. Much of what follows is drawn from the period 2005-2009 when Malcolm was particularly prolific, releasing four genuinely impressive albums back-to-back, all of which contained his trademark guitar playing and were packed with superb lyrics, often very self-deprecating to the extent of being on the verge of despair, but at other times laugh-out-loud funny with the most wonderfully astute observations on life. Oh and the boy also pens a magnificent love song when the mood takes him.

If you’re not familiar with his work, then I hope you find this to be a good place to start and then you’ll go explore further. Trust me on this one, you won’t regret it.

There are days when I think Into The Woods could well be my favourite Scottish album of all time. This is one of many outstanding tracks, racing along at a fair old pace as Malcolm ponders on why things just never seem to ever work out the way he planned. He also namechecks Falkirk High, the main line rail halt of his home town, as his favourite place for the fact that it can offer both an escape and a return to familiar territory….not that he has any intention of doing the former to lead to the latter.

A 21st century companion to Bedsitter by Soft Cell in which, we are reminded, thanks to everyone being skint, staying in is the new going out….and that singing along with the sad songs isn’t necessarily a bad thing.

The whole world’s going home with blue plastic bags
Six bottles of Stella, Jacob’s Creek and twenty fags
And you know there is no shame
Because we’re all doing the same

One of the saddest and most poignant songs I have in my entire collection.

I don’t think I’ve ever read anything about Malcolm directly having struggles with his mental health, although many of his lyrics do cover feelings of despair and do feel like the work of someone who has personal experience of anxiety attacks, depression and fears of self-harm; perhaps it isn’t him and he is/has been very close to someone in such a situation. This is an astonishingly moving number that was the subject of a reverential cover a couple of years later by King Creosote.

The ICA has to go immediately upbeat and there’s no better way than this, the lead-off single from album #5. It deals with familiar territory to many singer/songwriters, namely that being out on the road earning an honest crust can be quite lonely and soul-destroying, especially when the one you love cannot be with you. In Malcolm’s case, he gets a daily reminder when he puts on his freshly washed favourite pair of socks:-

I’ve grown to hate you red travellin’ socks
You take me away from the one I love
All you have is distance and time
I’m out of sight but I’m on her mind
Take me home, take me home

But, being Malcolm Middleton, there is a sting in the tale. He’s no sooner back home in the arms of his beloved than he’s concluding that noth he and his beloved are better off when he’s out on the road:-

Malcolm toured a great deal between 2005 and 2010, during which he also released an excellent double CD of live recordings, Long Dark Night/Live in Zurich, one of which was just him and his acoustic guitar and the other was with the full touring band. He announced towards the end of the Waxing Gibbous tour that he was taking time off to go and do something a bit different, but very few fans expected an album of near instrumental music which highlighted his love of 80s electronica in all its forms. It was a brave move, and for the most part it worked, leading to a nomination for the Scottish Album of the Year, albeit some of the tracks took a bit of getting used to. The album opener, however, remains an imperious piece of music and is a great way to close out your first side of the ICA

As I said when I previously penned some thoughts on the album, even when something good comes into Malcolm’s life all he can think about I how inevitably it will all go wrong again at some point in the near future. In this instance, he’s fallen in love which is clearly a good thing. Or is it? After all, it’s only a matter of time before the relationship ends and he’ll be in pieces. But then again…if he does get heartbroken then he can get back to writing the songs that make him a decent musician. Only problem is, he likes being in love….

See that opening remark I made about the boy penning a magnificent love song when the mood takes him? Life is so full of regrets…..

“We all get comfort from knowing that other people are uncomfy too. To me, this is a support anthem for people who find it hard leaving the house sometimes or socialising in general. If you’re on your own at home and feeling depressed it’s funny to think there’s millions of other people feeling exactly the same.”

This was Malcolm’s own take on the title track of his third album; the key word here is ‘anthem’ for it’s a joyously, upbeat and happy sounding number underpinned by keyboards and a great contribution on the violin and backing vocals by Jenny Reeve who proved to be an essential mainstay of the touring band for years.

Another on which Jenny Reeve features prominently, on another self-deprecating song in which Malcolm thinks about all the things that make him miserable before concluding that in fact he’s happy.

But, as there’s always some sort of but in the optimistic songs……

Well, it’s only a matter of time
Before I feel like shit again
I’m a happy army marching to defeat

A near seven-minute epic which closes that particular album and is my choice to see out this ICA. It’s the manifesto of life and work according to Malcolm Bruce Middleton, musician and lyricist extraordinaire.

More info, including how to buy his solo material, can be found here.